Hundreds of mourners today attended the funeral of a soldier from North Falmouth who was killed in Iraq. 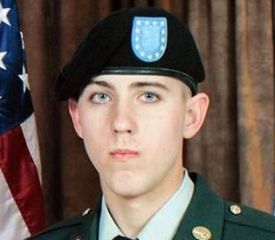 Army Sgt. Matthew Gallagher died on June 28 in Iraq’s Wasit province. He was 22.

Following his death, Gallagher’s mother, Cheryl Ruggerio, told the Falmouth Patch that her son “really found his niche in the Army. He loved being a soldier.” A Falmouth High graduate, Gallagher was on his second tour of duty in Iraq when he was killed.

Gallagher died of non-combat-related injuries in an incident the Army continues to investigate. At the funeral today, people who knew Gallagher had questions about his death.

“I got a pretty good sense that in general people were kind of puzzled by the fact that the Defense Department is not revealing more about the circumstances of his death,” said WBUR’s Fred Thys, who attended the funeral. (Fred will have a report on the services in tomorrow’s Morning Edition.)

Gallagher was buried at the Massachusetts National Cemetery in Bourne. According to USA Today’s ongoing tally, Gallagher is the state’s 77th Iraq War fatality. The last fatality was in 2009.