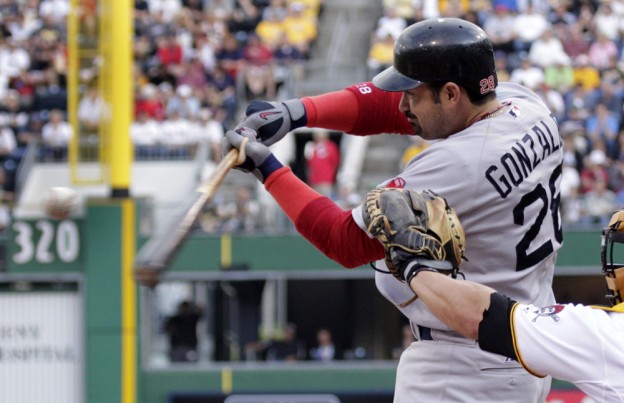 Adrian Gonzalez has had an MVP-caliber first half of the season for the Red Sox. (AP)

If I had told you in March that the Sox would be half a game behind the Yankees just before the All-Star break, you probably would’ve been disappointed.

In April, if I’d said the same thing, you’d have been elated.

Point is, no one ever knows what to expect. So, 86 games into the 162-game season, just how are the Red Sox doing? Because manager Terry Franconca never seems to settle on a lineup, here’s a snapshot of the Sox’ season, in no particular order:

– Adrian Gonzalez is really good. If anyone not made out of solid gold is worth $154
million, it’s the hard-hitting first baseman. He turns major league pitchers into batting practice fodder. Just look at these stats.

– The jury is still out on Carl Crawford. The Sox’ other big time offseason acquisition, Crawford hasn’t quite won fans like Gonzalez. A slow start to the season made him look uncomfortable in Boston, and a recent injury has cooled off his rebound.

– The young are old and the old are young. Pups Clay Buccholz and Jed Lowrie have struggled with injuries that have derailed their seasons. Meanwhile, 31-year-old Josh Beckett and the ancient 44-year-old Tim Wakefield have made 30 look like the new 20.

– Big-money men John Lackey and J.D. Drew have been dreadful. With the amount of boos targeted at them, Lackey and Drew must feel as if they play every home game in New York.

– It’s not how you start, it’s how you finish — and start. All 162 games are created equal, whether they’re played in April’s chill or on a brisk fall day. After winning just two of their first 12 games, the Sox looked worse than July Fourth traffic. Now, sitting tied for the most wins in the American League, fans once again expect fireworks rather than explosions.

– The Yankees aren’t perfect. Even with the Red Sox’s successful decade, it’s still all about New York in Boston. Ace/assassin C.C. Sabathia aside, the Yankees’ starting rotation is in shambles and the bottom of their order features mere mortals — for once.

– Beckett, Jacoby Ellsbury and David Ortiz have made fans happy. After developing a new pitch, Beckett is resurgent. After battling injuries in the past, Ellsbury has stabilized the topsy-turvy outfield and showcased some newfound power. And Ortiz is still chugging along, smiling all the while.

– The bullpen is better — way better. At times last year it felt like going to the bullpen was like running out of clean clothes: just hold your nose and pick. General Manager Theo Epstein pledged to rebuild the ‘pen, and adding Alfredo Aceves, Matt Albers and Dan Wheeler to Daniel Bard and Jonathan Papelbon looks like a winning rebuilding effort.

– The Sox haven’t won anything yet. In what some dubbed a World Series preview, the Sox dropped two of three to the Philadelphia Phillies. Normally great against the National League, the Sox managed to go 10-8 in Interleague play but lost series to the lowly Pirates and Padres.

If the Red Sox play another National League foe this year, you can expect fans will be happy.