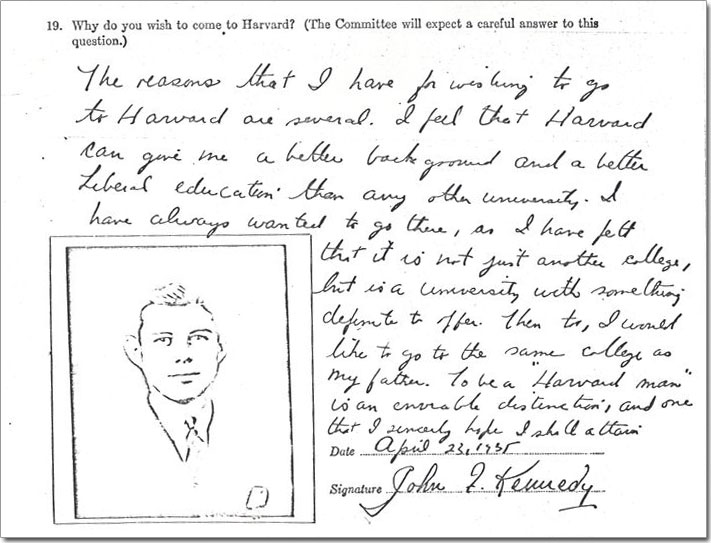 It was a lot easier to get into Harvard in 1935. Or maybe it’s because he was a Kennedy.

The John F. Kennedy Presidential Library has digitized some of its massive collection of presidential photographs, telegrams, phone recordings, notes and doodles.

While digging through the digital treasure trove — called the largest project of its kind — I turned up Kennedy’s undergraduate application to Harvard. His grades are mediocre and his penmanship poor.

In his admission essay, dated April 23, 1935, Kennedy writes that he wants to become a “Harvard man,” just like his father, alongside a sparse but faithful self-portrait.

Why do you wish to come to Harvard? (The Committee will expect a careful answer to this question.)

The reasons that I have for wanting to go to Harvard are several. I feel that Harvard can give me a better background and a better liberal education than any other university. I have always wanted to go there, as I have felt that it is not just another college, but is a university with something definite to offer. Then too, I would like to go to the same college as my father. To be a “Harvard man” is an enviable distinction, and one that I sincerely hope I shall attain.

Enclosed are Kennedy’s average report cards (he was ranked 65th in a class of 110), a letter of endorsement from his father, Joseph P. Kennedy (then chairman of the just-created Securities and Exchange Commission), his extracurricular activities (zilch) and a hand-written letter requesting permission to delay his enrollment one year so that he may study abroad (permission granted).

Kennedy would attend Harvard, of course, and the School of Government would become named after him.

You can browse Kennedy’s college application materials on Scribd.

END_OF_DOCUMENT_TOKEN_TO_BE_REPLACED

The city’s Elections Department has released the final but unofficial list of candidates for the 7th City Council district, left vacant by Chuck Turner’s unceremonious sacking.

The special election is set for Feb. 15. 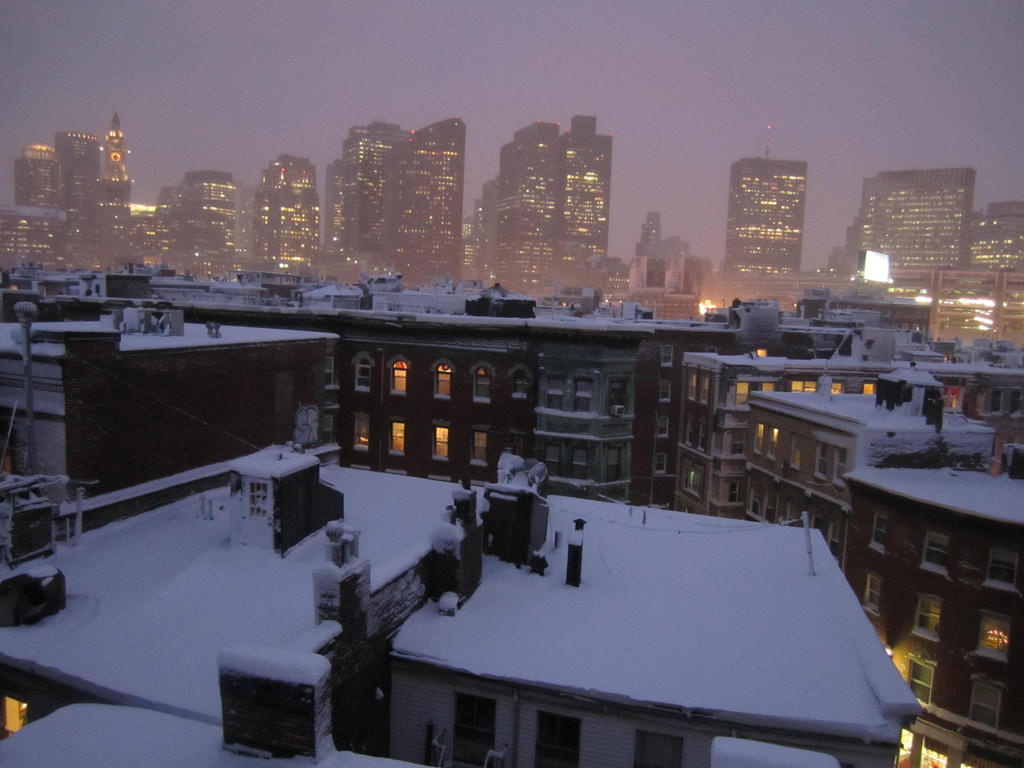 What a beautiful morning in Boston… that is, after you’re done digging out.

A state of emergency remains in effect, as some 6,000 homes and businesses are still without power and more than 250 schools are closed or starting late for the second day. (Channel 5 has the most up-to-date list.)

Gov. Deval Patrick is asking drivers to slow down and be courteous. “Take it easy when you’re out there, and please yield to the clean-up crews,” he said. “I know people will be back out on the roads going to work, i understand that and welcome that. Just keep an eye out for the people working on your behalf.”

Patrick says he does not know yet how much this cleanup will cost — just that it will cost “a lot.”

In other news… Vicki Reggie Kennedy says, for goodness sake, she is not running for her late husband’s Senate seat. The Globe speculates: Who’s next?

The JFK Library opens its archives online today. I’ll be talking more about this on Radio Boston.

Boston University is leading a study of Alzheimer’s and dementia in China as the country starts to tackle the disease.

And we’re expecting a possible announcement of a new president at the University of Massachusetts.