This map is in beta! Please report errors in the comments. Update, 1/31: We stopped accepting submissions at 6 p.m. There are 200 pins on the map. Update, 1/30: I’m working hard to update this map with all of your submissions. It is a technical challenge because the data comes from multiple sources. Thanks for your patience with our experiment. Update, 1/29: Added Mayor’s Hotline data.

The city of Boston is inundated with reports of un-shoveled sidewalks and other snow violations, less than 24 hours after the snow emergency ended.

This is where you come in. We’re mapping the problem spots, block by block. If you see an unshoveled sidewalk, inaccessible bus stop, blocked hydrant or other problem, report it.

There are four ways to report:

We’re looking for reports in Greater Boston where snow removal is required under local law.

Good morning! Sick of the white sludge yet? Well, it’s going to (literally) stick around… forever. Expect another inch of it Saturday and a big storm next week. Temps won’t rise above 30 for the foreseeable future.

Encouraging new numbers on the economy today. The economy grew briskly in the 2010 fourth quarter, an annual rate of 3.2 percent, the Commerce Department reported. Here in Boston, the world’s top economists are gathering at MIT. WBUR’s Curt Nickisch was in the room.

Some rare good news about Boston’s homeless population: It’s down. That’s the finding of the annual homeless census, which WBUR’s Benjamin Swasey participated in last December.

As I mentioned in yesterday’s state budget roundup, Gov. Deval Patrick proposes to close two prisons. The Globe reports details of that plan are vague, but as WBUR’s Fred Thys reports, Patrick is already getting praise.

Finally, the New York Times reports on the progress (or lack thereof) of ROTC returning to college campuses, now that the military’s “don’t ask, don’t tell” policy is repealed. Harvard President Drew Faust has said the group would be allowed back on campus after a longtime ban. A law professor and military observer told the Times: “I would be the most surprised person in the world if the military came back to Harvard or Yale.”

Spotted on Cambridge Common while walking to work this morning. Perhaps it is a model snowme, or a snowmeless shelter? 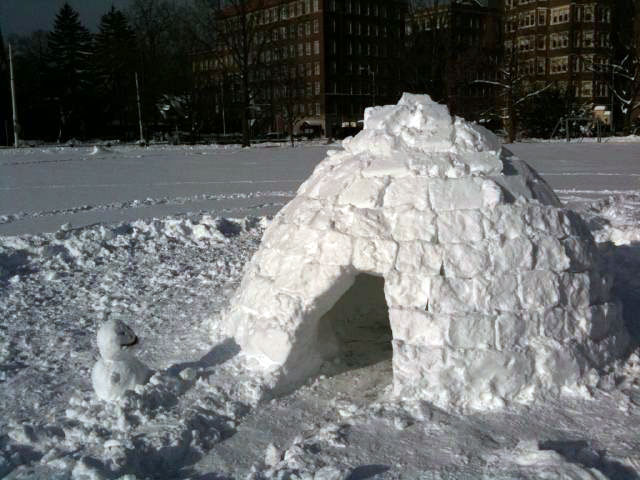 What do you see on your morning commute? E-mail your photos to aphelps@wbur.org or tweet them and mention @andrewphelps.

Update: The power of Twitter never ceases to amaze me. Not more than an hour after I snapped the photo, the igloo builder’s wife (@sweetamandine) replied to thank me. The igloo builder is Eli Schleifer of Cambridge.