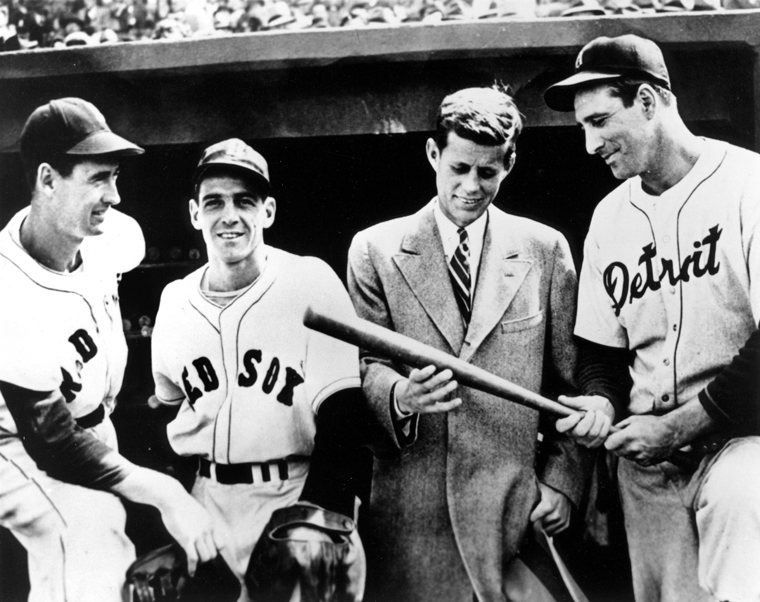 On Thursday, after digging up President John F. Kennedy’s application to Harvard, I erroneously said the JFK Library had finished digitizing “most” of its presidential archives.

“This is one half of 1 percent of our collections,” said James Roth, an archivist at the JFK Library who joined in the monumental effort.

“We’re expecting to continue on through the next few decades, and hopefully, as technology increases, we’ll be able to put more and more material up faster.”

Decades! The 200,000 pages of documents now online are a fraction of the 48 million pages in the Kennedy archives. While other presidential libraries feature some materials online, this is by far the most expansive digital collection. Local tech companies such as EMC, Raytheon and Iron Mountain donated the hardware and software.

Roth told me it wasn’t so much the scanning that took time — yes, the archivists place every page onto a flatbed scanner by hand — but the meta-tagging. Every film clip, transcript, phone recording and doodle has to be described and indexed. It is arduous. The first batch took almost four years.

But hugely rewarding. “The beauty of seeing all these different documents is that you get a sense that there is no one moment of ‘That’s when a decision was made’,” Roth said. “It’s the process, the context of the documents, and how individual ideas were formed and how they changed.”

One of his favorite examples is the evolution of Kennedy’s famous inaugural address, which was delivered 50 years ago next week. You can see the late Ted Sorensen’s original draft with JFK’s notes in the margins. The famous “ask not” line began as “Ask not what your country is going to do for you…” Kennedy labored over that sentence and settled on “can.”

Now the born-digital generation, raised in the era of Barack Obama and the Internet presidency, can discover a bit of history they might not otherwise have bothered to find. 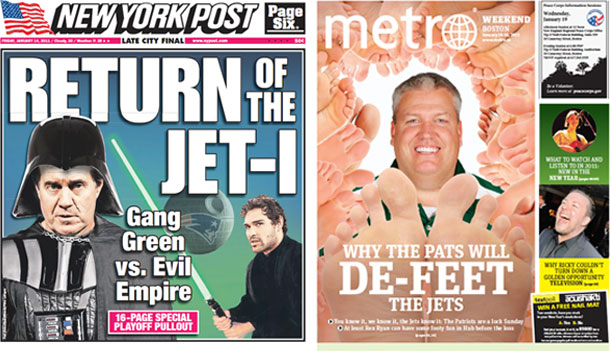 A tale of two front pages

Planning to rob a bank this weekend? Schedule any activity during which you want to avoid crowds for Sunday between 4 and 8 p.m. — that’s when the Patriots face off against the hated New York Jets for a spot in the AFC Championship game.

Any game featuring the Pats and Jets, or Boston and New York, is always filled with drama. Having split the season series at one win apiece, and needing only three more wins to etch their names in the history books, both teams head to Foxboro on Sunday knowing that they can win and move one step closer to the Super Bowl.

How do you know that two teams (and their associated fanbases) hate each other? When they bring their dislike to the media, and local newspapers pile on.

The talk surrounding this game borders on the absurd.

Jets cornerback Antonio Cromartie is feuding with hall-of-fame-headed, model-wife-marrying, three-time Super Bowl champion Tom Brady (a Sisyphean task if ever there was one.) Headline machine Rex Ryan is hoping to get into Patriots coach Bill Belichick’s head. Perhaps most notably, the media has latched on to a story about Ryan’s wife’s feet, and Patriots wideout Wes Welker used the opportunity to give one of the most hilarious press conferences of all time.

The Boston Metro was only too happy to indulge Pats fans by taking, ahem, a kick at Ryan. (If you don’t understand the Metro’s cover, you can find the “story” here.)

For once, the game of football lives up to its name.

Good Friday morning! Do you have a three-day weekend?

On Monday, Boston University will honor its most famous alum, Martin Luther King.

There are nine job openings on the state’s Parole Board. Gov. Deval Patrick forced the entire board to resign Thursday after it came to light that a career criminal was released on parole and went on to kill a Woburn police officer last month. Patrick also made public the state investigation (Scribd) of the Dominic Cinelli case. The Herald declared: “The Bay State’s liberal governor yesterday morphed into a tough-on-crime high sheriff.”

The five-campus University of Massachusetts system has a new president: Robert Caret (kuh-RHET) of Towson University, outside of Baltimore. WBUR’s Bianca Vazquez Toness has a nice profile of Caret, who has raised the profile of urban universities. You can also follow that link for Morning Edition’s interview with Caret.

The JFK Library digitized most of its massive presidential archives and opened a new website to the public. I uncovered Kennedy’s (mediocre) Harvard application, and I’ll be posting more nuggets as I find them. I’ll be on Radio Boston today to play back some rare telephone recordings and speeches.

And I can’t fail to mention the biggest story in Boston this weekend: The Patriots-Jets rematch. It shall be epic.