Twitter is ground zero for snowstorms. There is no better place for news and conversation with reporters and neighbors when the white stuff is coming down.

Hash tags are an excellent way to narrow down the fire hose — and to get a more complete picture of a story from people you don’t otherwise follow. Consider the success of our #ViewFromMyWindow project, which brought together a lot of strangers under the same, snowy sky. 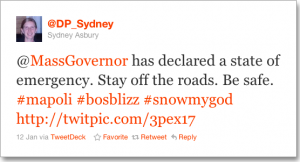 But hash tags are like currency — they only have value if everyone agrees on the same one. (Otherwise you get overloaded tweets like this one.)

Another storm is coming tonight, which surely brings another dispute about the right hash tag.

During the last storm, Boston.com blogger Garrett Quinn smartly polled readers about the best one to use. #SnowMyGod was the winner. Clever, but I had problems with it. First, it’s not Boston-specific. Second, it’s long-ish — 10 characters can be a lot. And third, the use of “God” might grate on some readers.

The poll entry from @KatPowers, #BosBlizz, did not win, but it was popular with the tastemakers. Quinn abandoned his own poll results to use it. And I, using my bully pulpit on the @WBUR account, told roughly 8,000 followers that #BosBlizz was, indeed, the chosen one.

But Boston.com readers had already selected #SnowMyGod, so the Globe used its bully pulpit to promote #SnowMyGod.

And then there was perhaps the biggest tastemaker in Boston’s digital universe: Adam Gaffin, the Universal Hub blogger, who quietly abstained from the debate and continued using the same hash tag he always has: #BostonSnow.

I think the hash tag should be specific to this storm and to Boston. #BosBlizz

@andrewphelps I think the National Weather Service should issue hashtags in advance the same way they name hurricanes in advance. #BosBlizz

Awesome idea, but don’t hold your breath. As tonight’s storm looms, the Globe is already asking readers to suggest a hash tag. I already feel anxious. We need to solve this. Who should decide, and how?

Dear readers, I ask you: What do you prefer? The dependable and unchanging #BostonSnow? Or a unique hash tag for each storm? If yes, then how do we reach a consensus?