“The subway, commuter rail and ferry services should be normal in time for the morning commute,” Patrick said.

5:33 p.m. Gov. Deval Patrick has started his press conference. You can watch it live, courtesy of NECN.

5:30 p.m. All that snow that just fell? Hope you like it. Forecasters are predicting cold temperatures for Boston through the holiday weekend, so the snow won’t be melting any time soon.

5:27 p.m. Gov. Deval Patrick is set to brief the public on the latest #BosBlizz developments. When that happens, we’ll bring you live coverage courtesy of New England Cable News.

4:50 p.m. The WBUR newsroom has an update on statewide power outages. There are still about 25,000 customers without power, down from a high of around 100,000 customers earlier. The outages are focused on the Southeastern part of the state.

4:32 p.m. Phelps is taking a short break. My colleagues will post updates in my stead.

All Green Line branches are now open. Service on the D and E lines has resumed.

3:45 p.m. @mattyven reports the power is back on in Coolidge Corner: 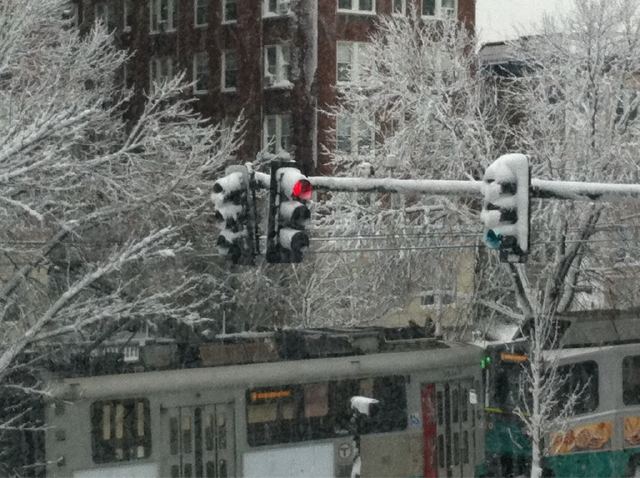 3:20 p.m. Although the worst is over, WCVB-TV meteorologist David Brown tells Radio Boston we should expect three to four more hours of snow, particularly in South Boston.

Many homes won’t have power restored till Thursday morning.

2:14 p.m. Inspired by Georgy Cohen in Somerville, I ventured outside and filed a video snow report from my own apartment on Concord Avenue in Cambridge. (Thanks to WBUR’s Joe Spurr for being my cameraman — he crashed here last night to avoid snow travel.)

Forecasters say the worst of the nor’easter is over.

The storm dumped upward of a foot of snow in some parts of greater Boston, up to two feet in Central Mass. and even more in Western Mass.

Nearly 100,000 homes are without power, mostly in the southeastern part of the state, with Marshfield, Plymouth, Brockton and Bridgewater appearing to be hit hardest.

Weymouth Deputy Fire Chief Jonathan Tose says his priority is making sure downed electric lines are not posing a threat there.

“We have a backlog of calls, and we’re trying to prioritize the calls as far as wires are down,” Tose said. “We’re trying to find out if it’s a power line as opposed to cable or  telephone line.”

National Grid says it hopes to have most customers back online by Thursday morning.

1:16 p.m. Great picture submitted to our Flickr group from Paul Keleher in Dover: 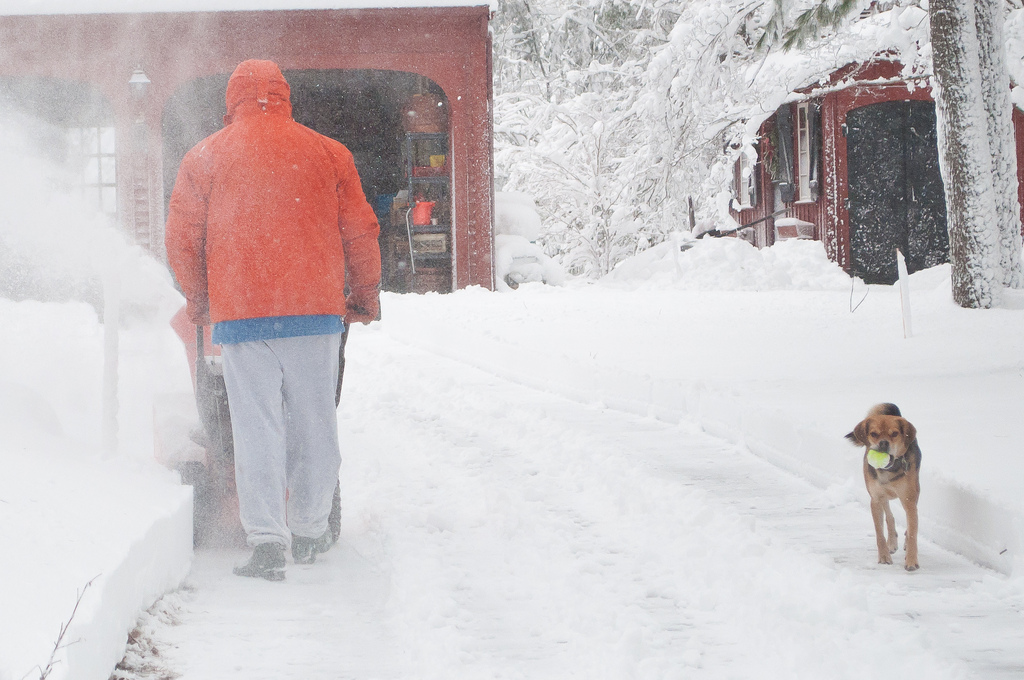 12:48 p.m. Transportation update from the newsroom:

12:02 p.m. I set up a live stream of #ViewFromMyWindow photos. Pretty cool!

This gives me the idea to record my own dispatch here in Cambridge.

11:17 a.m. It’s funny, we hyped the last storm much more — but this one seems to be dumping more snow and wreaking more havoc. The snowfall prediction has been revised to two feet.

Freezing fog occurs when liquid fog droplets freeze to surfaces, forming white soft or hard rime. This is very common on mountain tops which are exposed to low clouds. It is equivalent to freezing rain, and essentially the same as the ice that forms inside a freezer which is not of the “frostless” or “frost-free” type. The term “freezing fog” may also refer to fog where water vapor is super-cooled, filling the air with small ice crystals similar to very light snow. It seems to make the fog “tangible”, as if one could “grab a handful”.

As of 9:30 a.m., more than 87,000 homes were without power, mostly in southeastern Massachusetts. 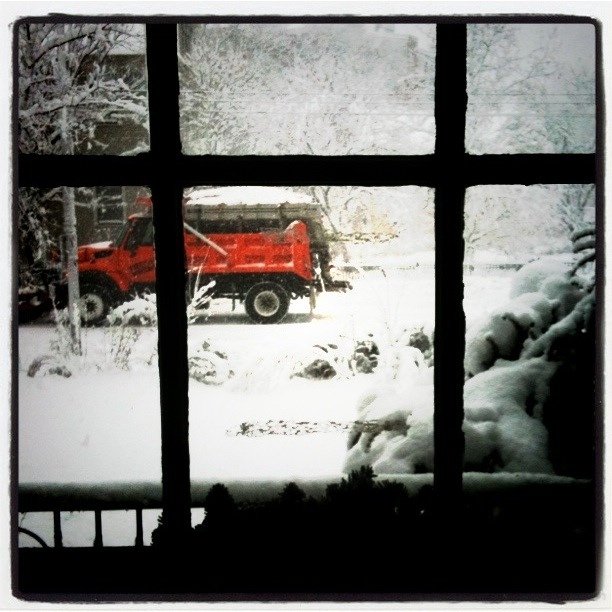 I feel like New Englanders are getting soft on Winter. Our parents had a name for storms like today: Wednesday.

9:00 a.m. WBUR’s John Davidow reports hearing thundersnow in Newton this morning, a rare phenomenon with an awesome name. He says he also saw a flash of lightning. The NWS explains thundersnow:

Although thunderstorms are less common in the winter, sometimes lightning can occur within snowstorms and is called thundersnow. Thundersnow can be found where there is relatively strong instability and abundant moisture above the surface, such as above a warm front.

8:20 a.m. Coming to grips with the fact that I’m a non-essential employee.

7:55 p.m. Just a reminder: The city requires property owners to clear ice and snow from abutting sidewalks within three hours of snowfall, between sunrise and sunset. Even though the sidewalk in front of your house is city property, it’s your responsibility to shovel. (And it’s illegal to shovel snow from your property onto public property.)

6:02 p.m. Follow our comprehensive storm coverage over here. WBUR’s Benjamin Swasey is doing a great job with it.

WBUR has decided to use #BosBlizz for all snow tweets.

5:45: Globe: Logan Airport will remain open, but many flights are cancelled.

There is some debate about whether #SnowMyGod or #HereWeSnowAgain is the hash tag for this storm. I also like #BosBlizz.

Check your town website for snow emergencies not covered here.