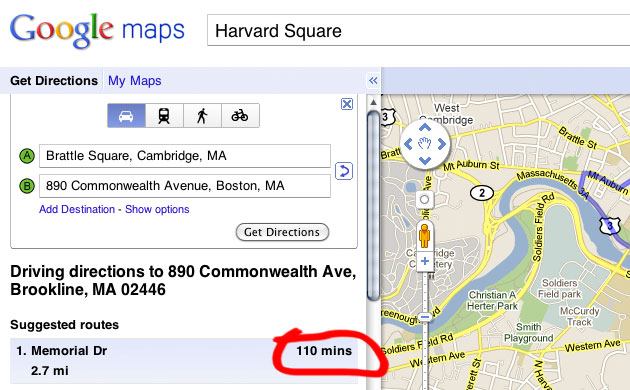 This isn't real, but it might as well be.

My colleague and neighbor in Harvard Square, WBUR’s Lisa Tobin, was kind of enough to give me a ride this morning. Traffic was moving through the square and on Memorial Drive. Then we arrived at the entrance to the BU Bridge rotary.

After staying in one place for 78 minutes, I reluctantly bailed on my poor driver and walked. I expected carnage at the other side of the bridge, an accident so horrific that the holdup could be forgiven. Nope, just one (1) Boston cop directing traffic.

Another Cambridge colleague, WBUR’s Joe Spurr, said he was not allowed onto the BU Bridge. He was redirected down Mem Drive, where he had to cross the Harvard bridge and then drive back up Comm. Ave.

Lisa finally arrived at work, 110 minutes after she left Cambridge. If hell ever froze over, Boston this morning is what it would look like.

And the Boston Globe reported yesterday that BU Bridge construction won’t be finished till December.

Your turn: Share your best (worst) commute nightmares in the comments. Hey, it’s good to vent.

If we get enough good stories, I’ll share them today on Radio Boston.