Another Nor’easter is coming. You know the drill: Move ya cah, stay off the roads, shovel ya sidewalks, etc. Newest information on top; refresh for updates.

5:12 p.m.: A final link to close out the live blog: Mark Lecesse tells us which meteorologist got the storm most right. Hint: NECN’s Matt Noyes.

10:23: Excellent advice from CommonHealth: 10 Tips To Protect Your Back While Shoveling 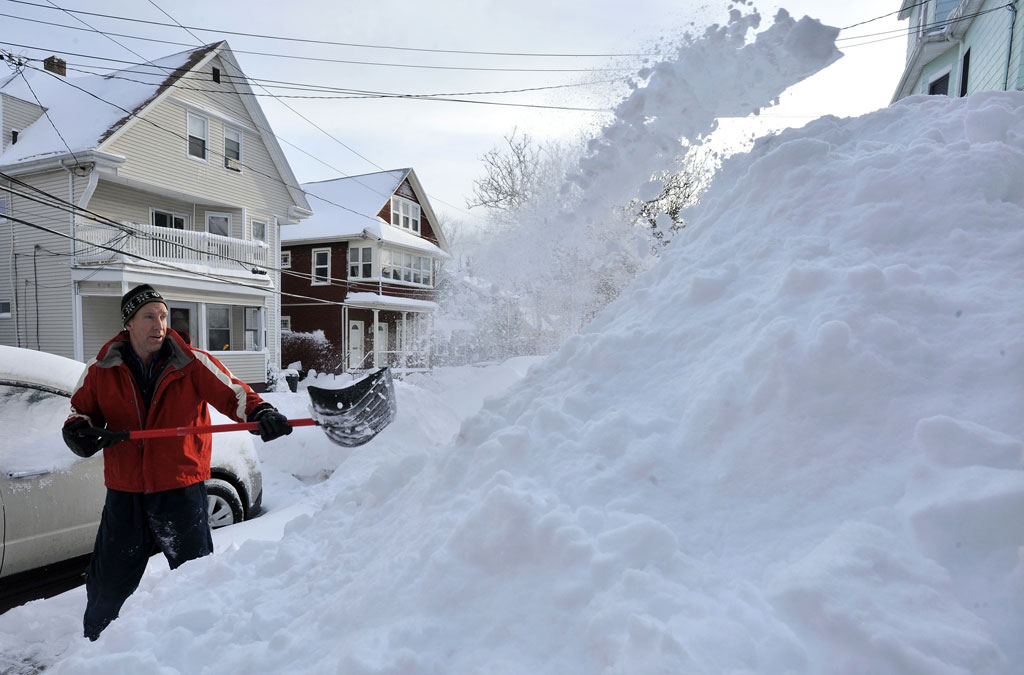 Kevin Andrew adds to the pile of snow on his front yard as he clears his driveway in Somerville on Thursday morning. (Josh Reynolds/AP)

9:53: Here is the latest from the newsroom on those men rescued safely in Lynn:

Fire authorities blame heavy snowfall for the roof collapse at a parking garage early this morning.

Two shuttle bus drivers for a senior-services agency were trapped inside the garage for a couple of hours.

Deputy Fire Chief James MacDonald said his rescue team had to saw through steel beams and corrugated metal to get to the men. MacDonald said he is worried this type of accident could happen again.

“We’ve had a lot of snow, we’re going to get more. Buildings like this don’t get shoveled off. We’re just at the mercy of the construction of buildings that people are working in,” he said.

The men did not appear to be hurt. They were taken to Mass. General Hospital as a precaution.

9:25: Here’s the view from my window in Cambridge. Looks like the trucks who plow the back parking lot are still sleeping. 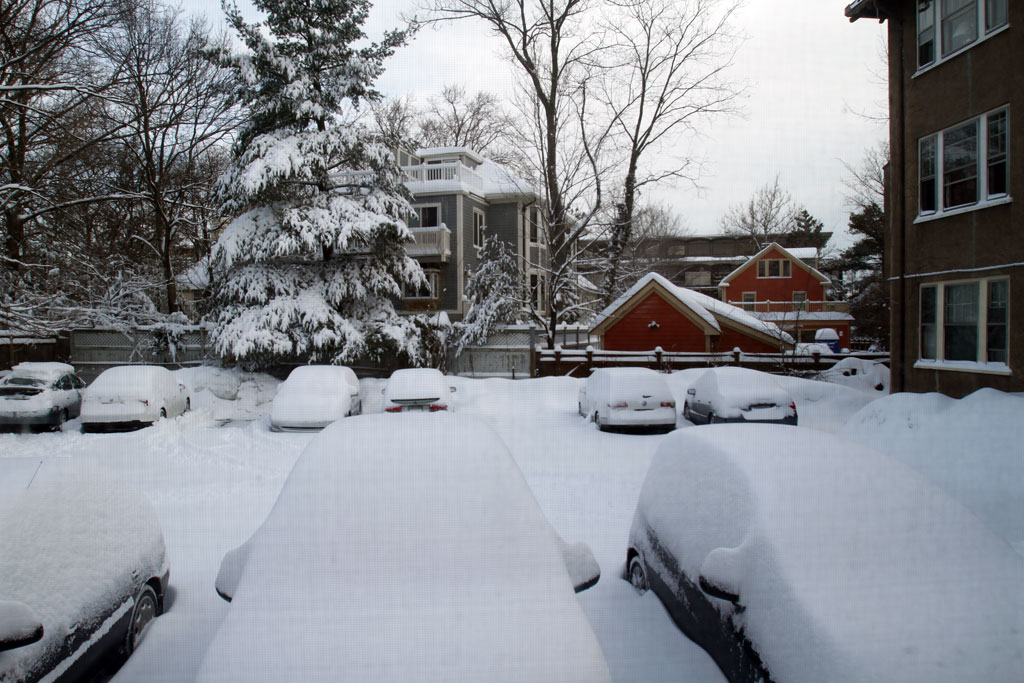 9:17: With the storm all but wrapped up, Boston has received some 62 inches of snow — almost a full Smoot, or about 0.7 Shaqs. Normally for this time of season, the total snowfall is about 19 inches.

8:44: Two people were rescued from the roof collapse in Lynn.

8:41: Guess what? More snow is forecast for Saturday — but it’s not supposed to stick.

8:35. How much of the white stuff came down? Boston got about one foot. Some areas got as much as 15 inches. Cape Cod got about 8 inches. “It came down fast and furious overnight,” said Channel 5 meteorologist Mike Wankum.

8:31: Power outages were relatively few, said Peter Judge, head of the Massachusetts Emergency Management Agency. He said 1,400 homes are without power, mostly in Plymouth County, down from  5,700 at the peak. Despite coastal flood warnings, there is no serious flooding.

8:20: In terms of travel… A Green “D” Line train derailed at Reservoir Station. No one was hurt, and passengers are being bused.

MBTA General Manager Richard Davey: “I would say the system is running with minor, if any delays. With commuter rail, I would ask customers to be mindful that they should expect five to 15-minute delays.”

Davey said there are about 30-minute delays on the Franklin Line. High-speed Red Line service in Mattapan is suspended. Amtrak trains between Boston and New York are suspended.

One runway is open at Logan. A second runway is expected to open by 9 a.m. Some arrivals have come in since the worst of the storm ended, but flights are not expected to return to normal until Friday afternoon.

8:14: The heavy snow caused a roof to to collapse at a parking garage in Lynn, trapping two people inside. Officials are concerned about the structural integrity of the building, which is complicating rescue efforts. Rescuers are in contact with the two people over cell phone. The Globe has more.

Thursday, 8:08 a.m. WCVB has the complete list of school closures and delays.

7:29: Boston Public Schools are closed Thursday. (There was some confusion about this while the BPS site is down.)

7:10: Parking bans are in effect in Boston, Cambridge, Somerville, Medford, Arlington. Watertown ban starts at 9. In Somerville, parking is permitted on the odd-numbered side of the street.

5:05: Effective 1 a.m., the entire Massachusetts coastline is under a flood warning.

4:48 p.m., Snow is already dusting some areas, including here at Boston University, and is expected to get heavier this evening. An emergency parking ban begins at 7 p.m. in Boston. A winter storm warning lasts till 10 a.m. Thursday.

The snow should end in the middle of the morning commute.