With reports that the Red Sox have traded for slugging first baseman Adrian Gonzalez, excitement for Opening Day is ramping up throughout Red Sox Nation.

Generally considered one of baseball’s top talents, the move allows Boston to keep pace with the Yankees’ talent-filled (and expensive) roster and has many fans convinced that the Sox will once again challenge their pesky New York neighbors for baseball supremacy in the Northeast. 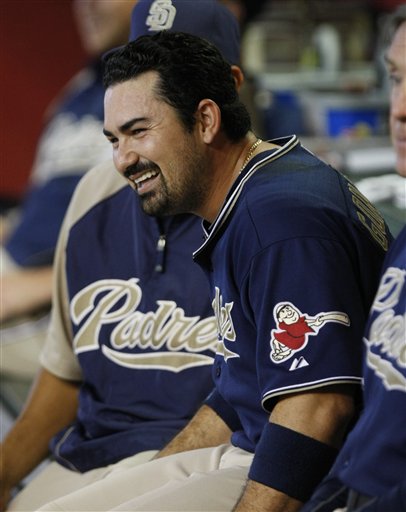 This trade makes sense from all sides. As my Bubbie says, you’ve got to pay good to get good. The Sox gave up a lot to get a lot, but they didn’t mortgage the future for short term gain.

Kelly, a right-handed pitcher who was once a shortstop, is hyped as the Sox’ top prospect in their farm system. The Sox, however, did well to keep potential shortstop of the future Jose Iglesias and right fielder Ryan Kalish.

If the deal goes through, the Sox will gain one Adrian but lose another. Free agent third baseman Adrian Beltre, who was the Sox’ best player in an injury-riddled 2010 season, probably won’t be re-signed.

Assuming Gonzalez passes a physical, the Red Sox will try to sign the 28-year old Gonzalez to a multi-year mega-extension and will add him to the solid bedrock of young talent that general manager Theo Epstein is building on.

The team is chock-full of young stars like Jon Lester, Kevin Youkilis, Dustin Pedroia, and Clay Buccholz. If manager Terry Francona can coax bounce-back years out of pitchers Josh Beckett and John Lackey, the Red Sox will be the World Series favorites.

So, which Adrian is more impressive? The one that inspired Rocky to beat Apollo Creed in Rocky II, or the one that can make believers out of professional cynics in Boston?