The law school students, Jeffrey H. Redfern, and Anant N. Pradhan, are asking the court to declare the security practices unconstitutional and to ban the TSA from using the scanners or pat-downs without reasonable suspicion or probable cause.

Boston Logan will be the first airport to get the new, less revealing “stick figure” scanners over the next six months. Before Thanksgiving, I wrote about your rights as an airport traveler.

We’re trying to book the plaintiffs for an interview on Thursday’s Morning Edition.

Update: I wondered, rather cynically, whether two Harvard law students might have filed the suit to get attention. According to a written statement, provided to WBUR by the university’s spokeswoman, that’s obviously not the case.

We honestly don’t have much to say that would be of general interest. So much has been said about this issue in the last month, and while we think we have some solid legal theories, they would be terribly boring to anyone but a lawyer. To the extent that our personal stories might be interesting, that is attention we would like to avoid. We only did the interview with The Record because it was a friend and everyone on campus already knew anyway. Beyond that, I don’t think Jeff and I want to enter the public fray – especially during finals period. Sorry we can’t help.

Needless to say, Redfern and Pradhan won’t be on Morning Edition.

Update: Here is the complaint on Scribd.

Update 2: The Harvard Law Record had the story first.

For the first time in 100 years, Boston city councilors have expelled one of their own colleagues:

The Boston City Council has expelled Councilor Chuck Turner following his conviction on federal corruption charges. The council voted 11-1 on Wednesday to remove the 70-year-old Turner from office.

Councilor Charles Yancey, a Turner supporter, was the only member to vote against expulsion, after stamping his feet on procedural grounds and trying to delay or postpone the hearing.

Turner represented the heart of Boston’s African-American community and has accused the FBI and federal prosecutors of targeting him because he is black.

“The reality is that the conviction that is being used as the reason for my removal … was a setup,” he told fellow councilors in a speech before the vote. “That conviction was rotten.”

After the vote, he called the council’s decision “a grievous error.”

Turner has to get out of his office by Friday.

Update 2: You can stream the hearing live on the City Council website (that is, if you have a way of viewing the old-school RealPlayer format.) 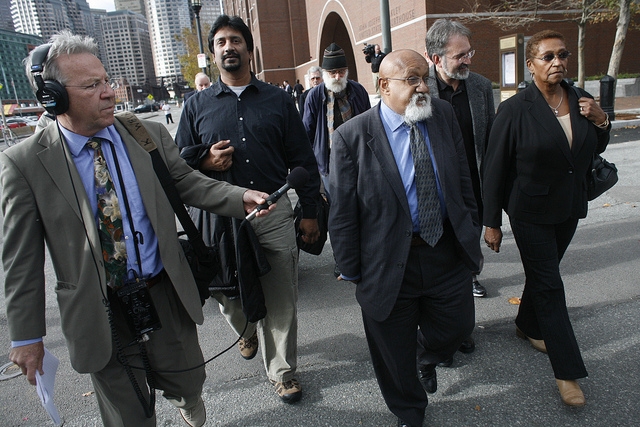 City Councilor Chuck Turner, with WBUR’s David Boeri at left, leaves the Moakley federal courthouse Oct. 29th after being found guilty on all counts in a corruption trial. (Dominick Reuter for WBUR)

Convicted Councilor Chuck Turner faces the music at 3 o’clock, when the Boston City Council votes to let him stay or let him go.

Council President Michael Ross and five other councilors have said publicly they will vote to oust Turner, and others have said privately they will do the same. It will take eight votes to kick him off the council. And it would be the first time the council has ever kicked off one of its own members. (Turner has recused himself from today’s vote.)

He remains defiant, telling WBUR’s Bob Oakes on Wednesday morning it would be a “moral mistake” to remove him before he is sentenced. If he gets probation instead of jail time, Turner reasons, he should be able to serve out his term.

A testy exchange came in the middle of the interview, when Bob pushed back hard (listen at the 2:30 mark):

The councilors know that there was no basis in my work with them for (former) U.S. Attorney (Michael) Sullivan initiating a sting operation.

Wait a minute, wait a minute, see, the issue I’m raising is a very important one, and that is that if I’d pleaded entrapment I think I would not have been convicted….

…But you didn’t do that, and you were convicted.

Turner has an army of supporters, including many constituents in his own district (who re-elected him last month despite a federal indictment). Left-wingers say his conviction, of taking a relatively small bribe — $1,000 — is a political attack on the civil rights movement.

But commenters around the Web aren’t so kind. Ozman writes on wbur.org:

You have been found guilty on every count. time to be a man and move on with your life. Serve your time in jail. And don’t take tax payers money as a retirement benefit, you don’t deserve that.

Turner has served his district, which includes Roxbury and parts of the Fenway, South End, Dorchester, for more than 10 years. If sent to prison, he says, he will do prison organizing.

What do you think? Is it time for Turner to “be a man and move on” with his political life? In the comments, specify whether you live in Turner’s district.

Update: The BPD has extended the deadline for “Toys for Tots” donations to Dec. 17. 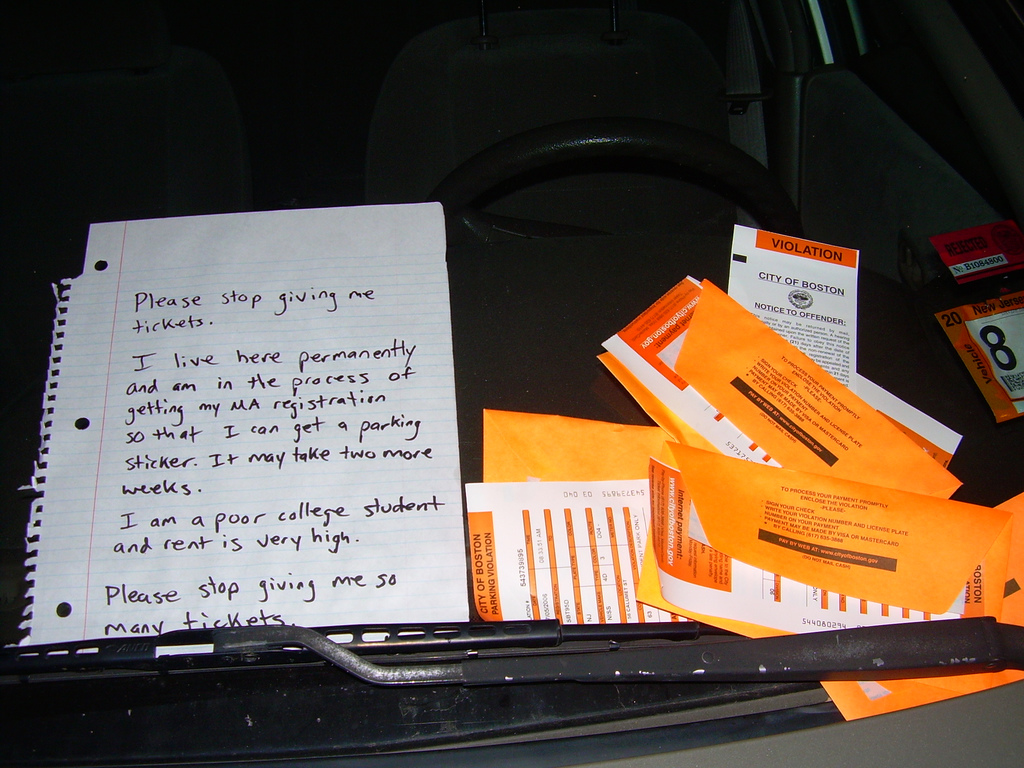 If you get a parking ticket in Boston today, tomorrow or Friday, you can be forgiven by donating a toy to a needy kid.

The toy value must be equal to or greater than the cost of the citation — this Barbie® I Can Be…™ News Anchor Doll won’t cut it if you forget to feed the meter, but the FurReal GoGo My Walkin’ Pup should cover it.

To participate in Toys for Tickets, drivers have from Monday, December 6th through Friday, December 10th to turn in the toys with a receipt from purchase, to either the Parking Clerk in Room 224 on the second floor of City Hall or the BTD Tow Lot at 200 Frontage Road.

The mayor’s office says the program yielded $3,000 worth of toys last year.

In other holiday parking news, metered parking is free on Saturdays until Dec. 26 to encourage shopping. A two-hour limit will still be enforced.

One more follow-up to my story about tax-free online shopping. As I mentioned, hardly anyone in Massachusetts pays the use tax due on items purchased out of state.

(Say you drive to New Hampshire to buy a mattress, or you purchase a laptop from Amazon.com. You won’t pay sales tax, but you are obligated to pay a use tax to Massachusetts while filing your year-end tax returns.)

I asked Bob Bliss, the Department of Revenue spokesman: Are Massachusetts taxpayers ever audited and found to owe use taxes?

“Basically, no,” he said. There was this one time, though, when a man purchased a sunroom from New Hampshire and trucked it back home to Massachusetts. Someone tattled on the man, and he was surprised to find a very large tax bill from the commonwealth.

“I cannot tell you with a straight face that that’s an everyday occurrence,” he said. 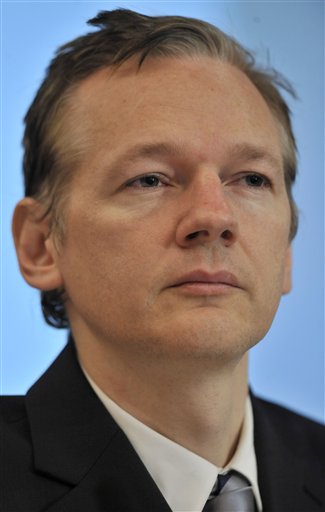 And the source or sources of all the diplomatic cables? Stengel asked Assange if U.S. Army PFC Bradley Manning, now detained in Quantico, Va., was the sole source of the megaleak. “We’re a source-protection organization,” Assange said, “so the last thing we would do is discuss possible sources. However, we do know that … the FBI, State Department and U.S. Army CID [Criminal Investigation Command] has been going around Boston visiting a number of people there.”

On Nov. 3, FBI agents are said to have detained and interrogated David House at Chicago’s O’Hare airport. House is a Cambridge man who helped set up a legal defense fund for Manning, the alleged WikiLeaker himself. House has visited Manning multiple times while in detention.

House didn’t return phone calls and e-mails from The Associated Press, and the FBI said it can’t confirm whether House was interviewed.

Are there other Boston connections?

Chuck Turner says it would be a moral mistake to expel him from the city council. The convicted councilor will learn of his fate at today’s meeting. (WBUR)

Politicians implicated in the damning Probation Department report got campaign cash from the lawyer who authored the report. Paul Ware and his firm, Goodwin Procter, contributed more than $200,000 to Beacon Hill politicians. (Herald)

Ian Bowles, the Patrick administration’s environment chief, is leaving. He pushed for the approval of Cape Wind during his tenure. (AP)

After a city tow truck crashed into his building, a Roxbury landlord got a ticket. “Accidents happen,” the city told him. (Globe)