In my previous post on the new texting-while-driving ban, I quoted the head of the Chiefs of Police Association saying 1) the new ban will be difficult to enforce and 2) that it may result in more, not fewer, crashes.

Let’s start with myth one: Many news reports have claimed — and some well-read bloggers have repeated — that driving-text bans don’t decrease the number of texting related crashes on our roads, and, that in some states, such bans have even increased them. Here’s the problem. That argument is lifted — uncritically — from a pretty unconvincing study released by the Highway Loss and Data Institute, a group of insurers that has long opposed driving-text bans. If you ignore the media and actually take a look at the report, it’s easy to see where the group’s bias has clouded its judgment.

Ahem, count me as one of those uncritical bloggers. Anderson says there are three reasons this logic is flawed:

As for Myth No. 2 — that texting laws are unenforceable — Anderson points to pilot projects in Hartford, Conn., and Syracuse, N.Y., that proved effective.

After six months of enforcement, the department observed texting while driving plummet 68 percent in Hartford and 42 percent in Syracuse. These findings suggest — quite convincingly, I might add — that when carried out properly, bans can work.

It’s a thorough write-up, worth reading. We’ll have to wait to see just what effect the ban has here in Massachusetts. Regardless, you’re going to stop texting, right? 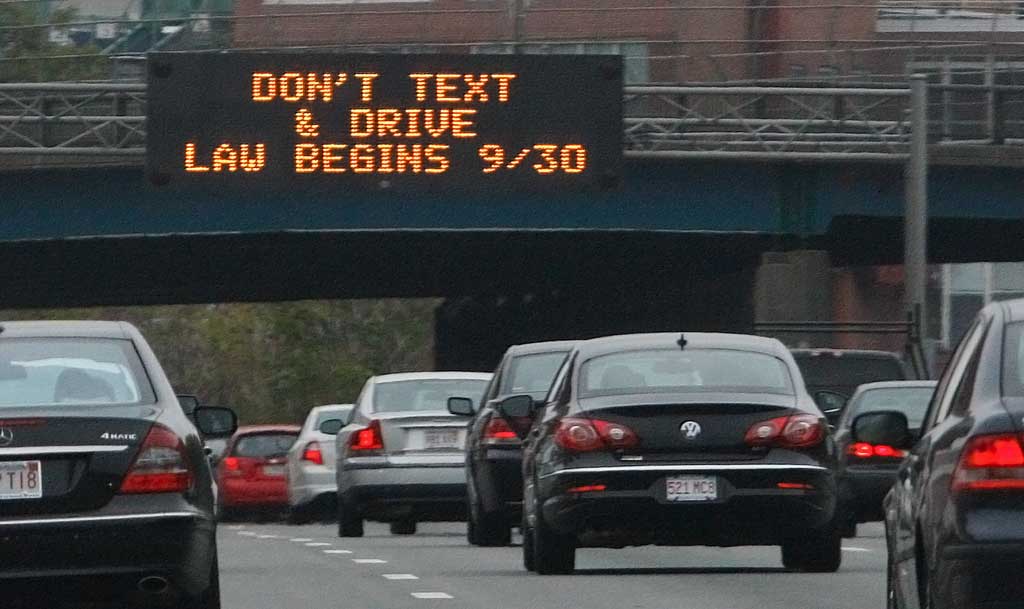 A sign over the Pike in Boston (Bill Sikes/AP)

It is law in Massachusetts today: You can get fined and lose your license for getting caught texting while driving — even while stopped in traffic.

Our producer Keosha Johnson posted a really useful FAQ on the new Safe Driving Law, answering such questions as Can an officer cite someone if he or she did not actually see the person texting? and Do police officers have the right to read the text messages on someone’s phone?

The law has many skeptics, including retired Police Chief Wayne Sampson, director of the Massachusetts Chiefs of Police Association, who spoke with WBUR’s Morning Edition.

“The problem with this type of a violation is that we have to observe the actual violation,” Sampson said. “And if an operator is holding the device down below the window level, it would be difficult to observe.”

And that’s exactly why texting bans elsewhere have led to the opposite of their intended effect, Sampson said.

“There has not been a reduction in motor-vehicle crashes because of this. And in some states, the number of motor vehicle crashes actually went up because they found that people were trying to be more deceptive by hiding the cellphone, and that was keeping their eyes off the roadway.”

Sampson was referring to a new study by the Insurance Institute for Highway Safety.

Back in June, I broke down exactly what “texting” means under this law — and boldly declared that you and I and everyone with a smartphone has done it. (A great many of you said no, you have never texted while driving, thank you very much.)

If you missed it, the New York Times has a great game that tests your distractedness.

We have all been waiting to see how the Boston Globe would charge for content on the Web. This just in:

The Boston Globe next year will split its digital news brands into two distinct websites, keeping Boston.com free while establishing a subscription-only pay site, BostonGlobe.com, which will feature all the content produced by the newspaper’s journalists, publisher Christopher M. Mayer said today.

The bifurcated paywall will launch in the second half of 2011.

Boston.com is one of the most valuable brands in the country.

This announcement comes the day after the departure of the website’s chief editor. Whether he saw this coming or not, David Beard was instrumental in making the Boston.com brand stand out from that of the Boston Globe.

With two strong brands in its arsenal, the NYT-owned Globe will continue building the enormous traffic and advertising revenue of Boston.com — and charge users for a premium, newspaper-like reading experience for the journalism:

BostonGlobe.com, designed to closely approximate the experience of reading the paper’s print version, will contain all the stories and other content from the day’s paper as well as exclusive reports, in-depth news, analysis, commentary, photos and graphics, plus video and interactive features.

The (paid) Globe Reader app is a start but falls short. As Dan Kennedy noted, the Reader does a poor job showcasing multimedia.

By focusing on the journalism at BostonGlobe.com — and leaving the slideshows, weather, travel news, events calendars and clutter to Boston.com — I imagine a website something like new Twitter. Focused, high design, multimedia-rich.

There are no pricing details yet.

As @agwieckowski notes on Twitter: “The NYT is next.” Another NYT property, the Worcester Telegram & Gazette, erected a partial paywall in August.

Here’s what’s news on a pre-storm Thursday morning in Boston:

Texting While Driving Is Now Illegal

State officials say they know enforcement of the new law may not be easy, but they hope just having it on the books increases awareness of the dangers of distracted driving. (WBUR)

Boston’s police commissioner says an SUV being sought in connection with the slayings of four people earlier this week has been recovered. (AP)

With the help of the FBI, Boston police are continuing to search for suspects in the shooting rampage that left four people dead, including a 2-year-old child, in Mattapan early Tuesday morning. A fifth person remains in critical condition. (WBUR)

As the men accused of gunning down a 14-year-old honors student in May stood behind a 4-foot wooden partition in Suffolk Superior Court during their arraignments yesterday, relatives of the victim occupied an entire row in the courtroom, sobbing and consoling one another. (Globe)

The I-Team first reported last week that one veteran officer is suspected of paying herself for dozens and dozens of details she never worked. Now the I-Team has learned all ten members of the MBTA police motorcycle unit are banned from working funeral processions effective immediately. (WBZ)

What are you reading today?

You may not know his name, but you have seen his work for years — maybe five or 10 times a day, if you’re a real news hound. 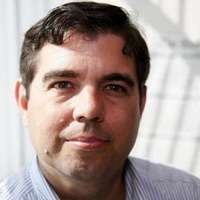 David Beard, the editor of Boston.com and a friend of WBUR, is leaving the Boston Globe to become the online editor at the National Journal in Washington, D.C.

“The city is diminished by his leaving, because he had a clear-eyed vision of what the ‘soul of the city’ is,” says my boss, John Davidow, the executive editor of wbur.org. Many of my colleagues have described Beard’s departure as another loss for the Globe — and for Boston.

Beard came to the Globe in 1998 and took the helm of Boston.com in 2004. Since then, Web traffic has grown to almost absurd numbers: 200 million page views a month, 13 million of them on mobile, according to the Globe. (His partnership with WBUR also helped our online audience grow.)

So why is Beard leaving? “I didn’t want to live my life managing decline,” he says of the ailing Globe, in an interview with the Nieman Journalism Lab. Beard wants a career change, and the move to the National Journal is a chance to help bolster deep, watchdog journalism in the nation’s capital.

The National Journal is rebranding itself as a “digital-first” news operation, perhaps in response to the royal butt-kicking from Politico, the startup that came from nowhere. Beard is, as we say, a good get.

He is also a great guy. Good luck, Dave.

Remember how Martha Coakley lost to Scott Brown in January? How she barely campaigned while Brown was shaking hands at Fenway? 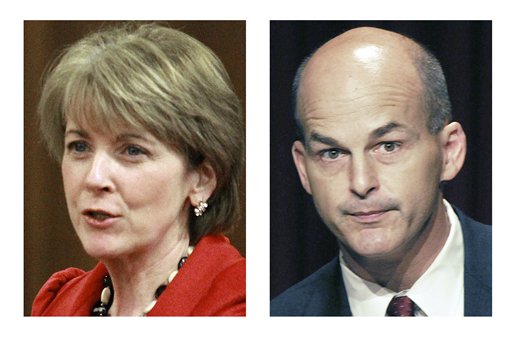 Now the attorney general faces a new challenger from out of nowhere, this time in her re-election bid. Millbury lawyer Jim McKenna, a Republican, scored an upset in his write-in campaign for the Sept. 14 primary election. It was the second time in Massachusetts history that a statewide write-in campaign succeeded.

“Martha Coakley is wrong on illegal immigration and she has failed to prosecute the political corruption on Beacon Hill,” McKenna declares on his campaign website. “She has been more focused on prosecuting Garden Clubs than with the lawmakers stuffing bribes down their shirts.”

END_OF_DOCUMENT_TOKEN_TO_BE_REPLACED

Imagine traveling to New York at 220 miles per hour.

Those of us who have made the perilous journey on a Fung Wah bus to New York can appreciate this: Amtrak has unveiled plans for a high-speed Northeast line that can get you there in an hour and 15 minutes. (The drive takes about four and a half hours.)

Amtrak would have to build new tracks, and the $117 billion proposal isn’t funded yet. Construction would begin as early as 2015, with the project slated for completion in 2040. So yeah, I’ll be 55. (Commenter Mike captures it: “This is a great idea, but can they reduce the construction schedule. We are so behind with high speed rail, starting in 2015 and ending in 2040 is a little sad.”)

Here are some of the lofty details from the news release:

END_OF_DOCUMENT_TOKEN_TO_BE_REPLACED 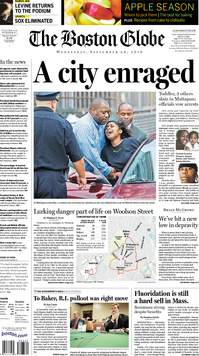 What’s news on a mild Wednesday morning in Boston — untempered outrage as the city reels from a quadruple homicide in Mattapan:

Boston’s grisliest mass murder in nearly two decades — made all the more horrific by the senseless execution of a baby in his young mother’s final embrace — sent horror rippling yesterday throughout the city, from the most powerful seats of government to the child’s devastated family. (Herald)

Woolson Street is one block away from the bustle of Morton Street. It’s a neighborhood of triple deckers in vinyl siding or in need of paint. And early Monday morning it was the scene of a crime that left four people, including a toddler, dead. (WBUR)

Rev. Eugene Rivers said the “Boston Miracle,” which pulled the city out of the murder spree of the 1990s, is “antiquity” now.  “We need a model that deploys faith-based workers, working with the police supporting them, and then providing seven-day-a-week wraparound care.” (WBUR)

Residents across huge swaths of Boston haven’t felt this kind of fear and uncertainty since the crack-induced violence of the late 1980s and early 1990s, when the combination of drugs, huge profits from dealing them, and guns fueled a surge in the homicide rate that seems unimaginable today. (Brian McGrory/Globe)

What else is news: Amtrak has unveiled plans for a high-speed train that would travel from Manhattan to Boston in 84 minutes. And Massachusetts appeared to weather the recession better than most, according to new census data.

Noam Chomsky says we should embrace, not marginalize, the Tea Party. He was on WBUR today. (On Point)

Massachusetts might lose a Congressional district. That would make the stakes even higher for the current election. (ElectionWire) 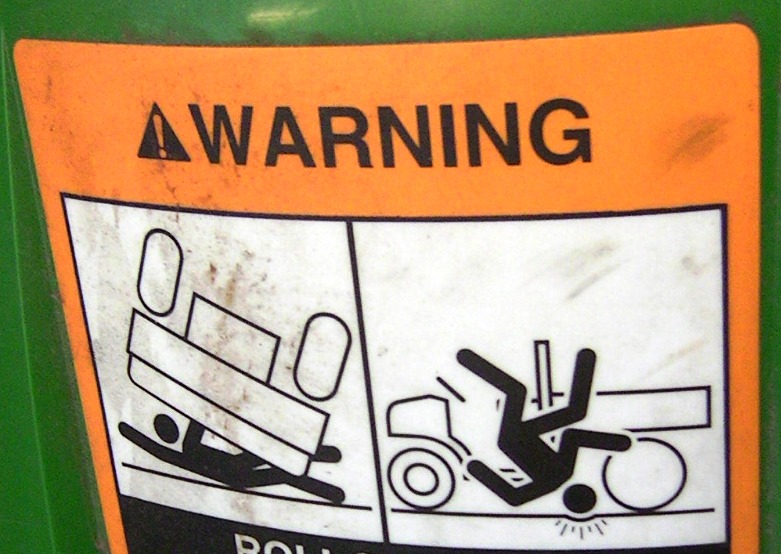 Thomas Wright of Brookline could have met this tragic end if Boston police had not intervened. (A.Currell/Flickr)

Women suffer from pain more than men. But women have more pain to put up with. (Radio Boston)

Kitty Dukakis is taking on beer distributors. The former alcoholic opposes the repeal of a sales tax on liquor, which funds addiction recovery services. (Universal Hub)

Zipcar is telling Cambridge drivers not to “door” bicyclists. The company is putting stickers on every side-view mirror. (CommonHealth)

Boston Police arrested Thomas Wright, of Brookline, for cruising around in a stolen golf cart. He “found” it outside of City Hall. (BPD News)

The putter used by Jim Furyk to win $11.35 million at the Tour Championship this weekend was purchased for $39 in Easton. It had been traded in by Pulitzer Prize-winning political cartoonist Paul Szep. (ESPN)

The 2009 American Community Survey is out — a sort of annual “mini-census” that should not be confused with the decennial census data coming out later this year.

I’m digging into the numbers for Massachusetts to see what has changed from 2008 (in statistically significant ways). Here are my initial discoveries:

Any interesting bits that I missed?

You can also get data for the City of Boston and the Boston-Cambridge-Quincy, MA-NH metropolitan area.