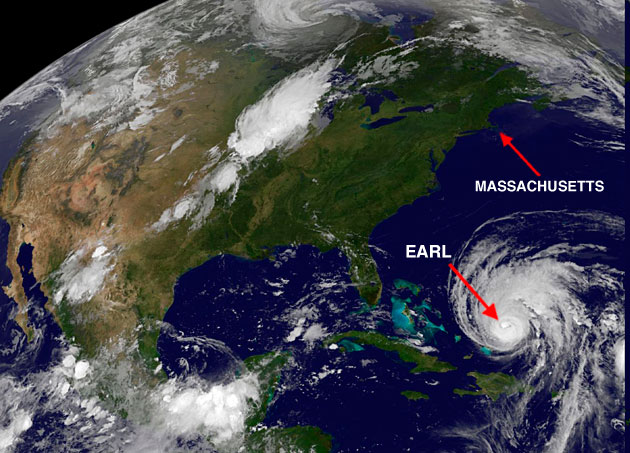 Update: The National Weather Service has issued a hurricane watch from Woods Hole to Sagamore Beach, including Martha’s Vineyard and Nantucket (not a warning, mind you).

Confused by all the misinformation about Hurricane Earl swirling around, Radio Boston brought on a proper meteorologist today to help explain what, if anything, will happen this weekend. At its best, Earl will be a weekend ruiner for folks on the Cape and islands. At its worst, Earl could cause serious damage — although that’s unlikely.

Universal Hub has deemed the potential threat serious enough to raise the French Toast Alert Level to Yellow — a system normally reserved for snowstorms but dusted off today for the tropical weather. In case you’re not familiar with the system:

The French Toast Alert System has been developed in consultation with local and federal emergency officials to help you determine when to panic and rush to the store to buy milk, eggs and bread.

Meanwhile, the National Weather Service is circulating a missive about hurricane terminology, including the difference between tropical cyclone, depression and storm, among other terms. IT IS ACTUALLY PRETTY INTERESTING IF YOU CAN TOLERATE ALL CAPS.

NECN meteorologist Matt Noyes blogs some preparation tips for people in vulnerable areas, which are especially useful for boat owners.

Hey, every cloud has a silver lining: Earl will break the heat wave. 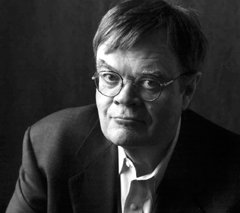 I’m not alone in thinking the medium of radio is alive and well.

A 17-year-old considering a career in radio wrote to Garrison Keillor for his advice. The public radio host and master storyteller responded thus:

Radio has a bright future which will be forged by young people following their own inspiration, not imitating their elders, though the essence of broadcasting is the same today as it was ninety years ago at the inception: radio is all about coherence.

We all live in a landscape of dense confusion and competing messages and radio attempts to give us a degree of clarity and a coherent view of the world, embodied in the human voice. It’s a powerful medium that speaks to our perpetual loneliness and I wish you well and hope you’ll hurl yourself bodily into getting a good education, studying the hard subjects, taking on a new language, reading the difficult texts.

I would treasure that letter.

A group of regulars would set up chairs outside Cardullo's in Harvard Square to watch Red Sox games through the window on the shop's flat screen TV. (Andrew Phelps/WBUR)

As news spread that Cardullo’s Gourmet Shoppe on Brattle Street had taken down its iconic big-screen television, members of the so-called chair club grieved the sudden passing of a coveted tradition.

“Shocked doesn’t even begin to describe how I’m feeling,” said Kelly Dugas Coveney, the First Lady of the chair club, an informal group of Red Sox fans who set up shop on the sidewalk outside Cardullo’s during games.

The sidewalk crowd would sometimes swell into the dozens. Ben Affleck and Dennis Leary were known to make appearances.

I had the pleasure of meeting some of the regulars in May for a WBUR story with Bob Oakes. (We loved them so much, Bob bought them a pizza.) If you haven’t already, stop what you’re doing and listen to this story. It’s as charming as it is hilarious.

Store president Donez Cardullo said the TV was removed as part of an ongoing effort to “clean up” the 60-year-old business.

“We’ve been working diligently to clean up the shop and regain our foothold in the food industry in Boston,” Cardullo said. “The time has come to stick to our mission, which is quality food and good service.”

Comments on the story are mixed:

cellrazor: How dare Cardullo’s not give any notice on something that was given away free and without promise. How dare they deprive the common citizen of their rights to sit on a lawn chair on public sidewalk blocking foot traffic while watching a display of programming which violates the terms of use against public broadcast. What is America coming to?

redbeard: I don’t tend to watch sports, but it always pleased me to see the ‘chair club’ and sometimes the positive feeling has spurred me to go into the store and buy myself a little treat, just because it reminded me of the fact that I like the place. I certainly won’t be AVOIDING Cardullos because of this, but perhaps I might not notice them as often, and noticing them while I’m on my way past for unrelated reasons is a prime factor in me going in.

What do you think? Have you ever walked past the chair club — maybe taken in a game from the sidewalk? Could this help or hurt business in crowded Harvard Square?

Weather forecasters are keeping a watchful eye on Hurricane Earl this morning, wondering if it will travel parallel to the New England coast and just give the area a glancing blow, or if it will move closer to shore, lashing the state with heavy surf, high winds, and rain. (Globe)

State Treasurer Timothy P. Cahill acknowledged last night that his campaign committee failed to pay an estimated $15,000 in state income taxes over the past decade, as required by law. (Globe)

The T vowed to set up a Twitter page for customers to report crime tips after a Herald story about a tweeting T rider who posted a real-time photo on the social networking site of a man allegedly exposing himself aboard a crowded Red Line train. The man in the photo was later arrested. (Herald)

The National Weather Service has declared an air quality alert for this afternoon, because the Boston area could see unhealthy levels of ozone as all that stagnant air just sits there, melting us with its slurpy tendrils of humidity. (Universal Hub)

Across the street from the Catholic student center and not far from the Jewish Hillel house: It’s the nation’s first-ever “humanist” student center for atheists and non-believers, complete with a chaplain. (Radio Boston)

What stories are you following today?

There’s surprisingly little chatter in the Boston blogosphere about President Obama‘s Iraq address. All I could find is this piece in the Attleboro Sun Chronicle.

NPR’s Corey Flintoff reports a good summary of what’s behind us and what’s ahead. On Point recently aired a good discussion with top reporters Anthony Shadid and Liz Sly.

Is the lack of talk a sign we’ve moved on? Are we more worried about our jobs? What does Boston think of Mr. Obama’s Iraq address? Tell us in the comments, or respond in the “Assignments” section of our iPhone app.