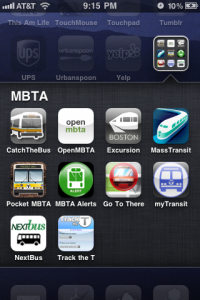 10 bucks' worth of MBTA apps on my iPhone

An exciting announcement today for anyone who waits for rides the bus: Real-time GPS tracking data is now available for all MBTA routes, serving 47 cities and towns.

That means app developers can write software to help commuters pinpoint the exact location of their next bus. The MBTA has dusted off an App Showcase page that lists 10 such programs.

To spare you the time and expense of trying them all, I will download, test and review each and every app — except, unfortunately, the Android apps. (You’ll have to tell me which ones you like.)

Get ready, get set…

Fast, simple interface. Choose your route, tap your stop, and a big number displays how many minutes you have to wait. The auto-refresh is nice, but I didn’t realize the feature existed at first because there is no way to tell it’s “live.” A map of each route is provided to help you identify the closest stop. This is handy, but you have to know your route first; an automatic “find the closest bus” feature would be stellar. Also, it would be useful (or maybe just cool) to see the exact location of your bus as a pin on the map.

Get the rest of my mini reviews after the jump. Or if you’re impatient, you can jump to the conclusion.

END_OF_DOCUMENT_TOKEN_TO_BE_REPLACED

The tweets and phone calls came in fast and furious as Radio Boston’s Sacha Pfeiffer interviewed Dresden Dolls lead singer Amanda Palmer (@amandapalmer), who is starring in the ART’s production of “Cabaret.” (I loved the Liza Minnelli version.) The audio of the interview is up now, if you fanboys and girls care to listen.

The show runs through Oct. 29 at the ART’s Oberon venue in Harvard Square.

I must say, she is charming.

Some of the most important news about Boston’s economy comes in the form of something very boring: the so-called beige book.

Think of it like a Zagat guide for the economy that’s updated eight times a year. The Federal Reserve System‘s 12 regional banks — one of which is headquartered in Boston — all survey businesses in their regions and compile the responses. It’s less about numbers and more about “How’s business?”

Ten of those banks reported very slow growth this time. But it’s a different story for the other two — Boston and Cleveland. (As WBUR’s Curt Nickisch noted on Twitter: “Good things come to Cleveland after LeBron leaves.”)

Here are highlights of the Boston Fed’s findings, which cover all of New England:

Our go-to expert, Alan Clayton-Matthews, talked with Morning Edition today. Clayton-Matthews said high-tech is lifting Boston’s economy ahead of the rest of the country. But businesses here are still reluctant to hire because of the weak recovery nationally and internationally. “Why would you want to expand if you may need to cut back in the near future?” he said.

Half of the high-tech firms surveyed by the Boston Fed have increased hiring, and one firm said it was “on the cusp of hiring.”

WBUR’s Bob Oakes asked Clayton-Matthews, Is this a blip or a trend?

“I think it’s a trend,” he said. But: “This recovery has a long way to go and it’s also a very unequal recovery.” By “unequal,” he means that metro Boston is racing ahead of the rest of the state. Massachusetts is still stuck in a recession.

Clayton-Matthews said the only thing that can “fix” our economy — and get people to start spending again — is time.

What are your economic indicators? How do things look from where you stand?

Lots of news on a fall-like Thursday morning in Boston:

Sources have told the Dennis & Callahan Show that Tom Brady was involved in a car accident on the corner of Commonwealth and Gloucester in Boston Thursday morning. According to the report Brady was “shaken” and it was believed that the jaws of life were used in the accident and that a pole was down at the scene. (WEEI)

From the WBUR newsroom: Boston Police says there was a transport to Brigham & Women’s Hospital due to an accident but couldn’t confirm it was Brady. Following.

Update: The Globe confirms — through unnamed sources — that Brady was involved in a Back Bay car accident but did not require hospitalization.

Patriots QB Tom Brady was in a car accident this morning. He was not hospitalized and is expected at Gillette Stadium today.

The Federal Reserve survey of regional businesses, known as the Beige Book, has been gloomy for months. But now, New England businesses — especially in information technology, manufacturing, and defense — say they are hiring and that they are seeing more sales. (WBUR)

A majority of Massachusetts voters want the state sales tax reduced from 6.25 percent to 3 percent, according to a new poll from the State House News Service. The measure is Question 3 on November’s ballot initiatives. (ElectionWire)

The “cold-blooded” murder of a Hyde Park deliveryman for his pocket cash and a pepperoni pizza has reignited the push to reinstate the death penalty — in the middle of a hotly contested gubernatorial campaign just as the race kicks into high gear. (Herald)

Emerson Has A New President

M. Lee Pelton, a Harvard-educated scholar of English and poetry, was named Emerson College’s next president yesterday, becoming the school’s first African-American president and one of a handful of black college leaders in the state.

What are you reading this morning?