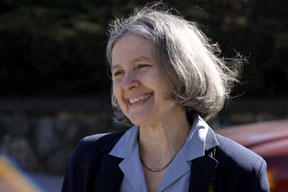 Jill Stein (courtesy of the campaign)

Every election has this candidate: She does not stand a realistic chance of winning, but she is on the ballot. How should we cover her?

This perennial question showed itself again when the Boston Media Consortium — which includes The Boston Globe, NECN, Channel 7, Channel 5, Channel 2 and WBUR — decided to exclude Green-Rainbow gubernatorial candidate Jill Stein from a Sept. 21 broadcast debate. Stein had not raised enough money to meet the consortium’s criteria for participation.

“The Boston Media Consortium thinks that they can silence our voices!” complained Jeff Boudreau on our Facebook page.

Today the consortium announced an about-face: Stein will be able to participate after all, since the debate falls before the Oct. 1 fundraising deadline. Earlier, before the decision was reversed, our ElectionWire political analysts chimed in.

Democrat Dan Payne wondered, “Why should a candidate with no chance of winning take up one-fourth of the time in debates that will help determine who governs Massachusetts?”

But Republican counterpart Todd Domke said Stein’s participation in debates is a matter of fairness — to the public:

Dr. Stein already proved her credibility. The media consortium came up with these criteria to keep wacko candidates from ruining constructive debates. But in the last debate, Stein was the only candidate to exceed expectations. Many viewers were surprised that she was as articulate and knowledgeable as the “serious” candidates. Now we’re supposed to pretend she is not on the ballot, not an option, not newsworthy, not a factor in a four-candidate field?

Of course, a Democrat (Payne) would have an interest in keeping out the candidate who might siphon votes from the Democratic incumbent. And a Republican (Domke) would want the incumbent’s re-election battle to be that much harder.

Give the longshots a chance to make their pitch and force the major-party candidates to react to their ideas. As we get closer to the wire, I think it’s legitimate to use polling in order to exclude candidates with no chance. I’d like to see Baker and Patrick debate one on one, but not yet.

What do you think? Does Jill Stein deserve equal access to debates? How would you rate our coverage? 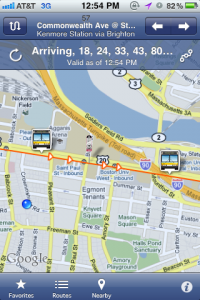 Pocket MBTA for iPhone is my favorite app so far.

Last week I wrote lightning reviews of all MBTA apps I could get my hands on. Here are my conclusions:

Pocket MBTA (iTunes) is my overall favorite iPhone app. At 99 cents, the price is right. The map-centric user interface makes abundant sense and the visuals are great.

In the category of mobile websites, I give the nod to TrackTheT for a very speedy, very “live” experience. For text-based services, JustHopOn is an easy choice over NextBus SMS, which is way too complicated—but also more powerful.

Unfortunately, I don’t know anyone with an Android device, so I couldn’t test those apps.

As some commenters have noted, the “holy grail” of MBTA apps does not exist yet. The app I have in mind would combine directions with live location data.

The MBTA website allows you to look up directions on its website — but does not make use of its own location data. The apps I tested are great for people who already know their route.

What transit apps do you use? Did I miss any?

What’s news on this first Monday of the football season:

Randy Moss Kind Of Has A Meltdown

Think of it as Courtney Love meets Oil Can Boyd. Shake well, toss in some sodium pentothal, and you have . . . Randy Moss at the podium for 14 minutes after yesterday’s season-opening 38-24 thrashing of the Cincinnati Bengals. (Globe)

Emily Staupe, a 30-year old woman who worked as a Northeastern University lab technician, was found dead at her Milford home early Sunday morning. Poice found a “sandwich-sized ziplock bag” at her side that allegedly contained crystallized cyanide and was labeled “cyanide.” (Bostonist)

Authorities allege the 26-year-old Chan was drunk when he ran a stop sign and struck a motorcycle being operated by six-year police department veteran Patrick Johnson. He was taken to a local hospital, where he was pronounced dead. (AP)

Charles Ansbacher, the founding conductor of the Boston Landmarks Orchestra, whose free concerts at the Hatch Shell on the Esplanade and in many city neighborhoods brought live classical music to thousands of Bostonians, died on Sunday in his home in Cambridge. (Globe)

Tomorrow is Primary Day. As this past weekend was “get out the vote weekend,” today offers one last chance for contenders to round up voters. Some candidates are taking full advantage. (ElectionWire)