Worcester is a study in urban decay and renewal. Abandoned warehouses and idle factories. A shuttered parking lot next to failed mall. But as WBUR’s Curt Nickisch reported this morning, these empty spaces are beginning to make way for condos, offices and biotech labs — taking advantage of the cheap rent and light traffic, at least compared to big brother Boston.

END_OF_DOCUMENT_TOKEN_TO_BE_REPLACED

This billboard for the hyperlocal network CentralMassNews.com appears to take a jab at the Worcester Telegram & Gazette, which recently started charging for some online content. (Andrew Phelps/WBUR)

Now it seems the hyperlocal network CentralMassNews.com is capitalizing on the unpopularity of that decision with readers, who apparently expect the news is and always should be free. A billboard on Shrewsbury Street declares, “Never pay for news again!”

Unfortunately, as you hear us say during pledge drives, the news is expensive. I find the farthest west I travel, the harder it is to find diverse sources of news and information. I am spoiled by Boston’s two newspapers, alt weeklies, broadcast media — and the bloggers and aggregators who are equally important in helping me parse the news. Boston’s media market may be shrinking, but Worcester feels like a desert.

Then again, it could be I just don’t know what’s out here. Central Bay Staters, where do you get news and information? Who should I follow? What should I read?

I get the feeling this stretch of Shrewsbury Street — one of the main drags in Worcester — used to really be someplace.

Every day this week I’m asking our Twitter followers (@WBUR) to tell us where to eat in the cities and towns along #Route9.

@Hnicho1 was first out of the gate:

George’s Coney Island Lunch on Southbridge Street, to be precise. “Best hot dogs, maybe in the state,” he added.

I read the tweet back to Oakes; his eyes lit up and he drove us straight there. (Bob grew up in Worcester County. He’s got a million stories.)

I was excited to photograph the beloved neon sign, maybe get a dog. I even survived the terrifying Kelley Square rotary to get there. Upon arrival, however, there was one problem (see second photo). 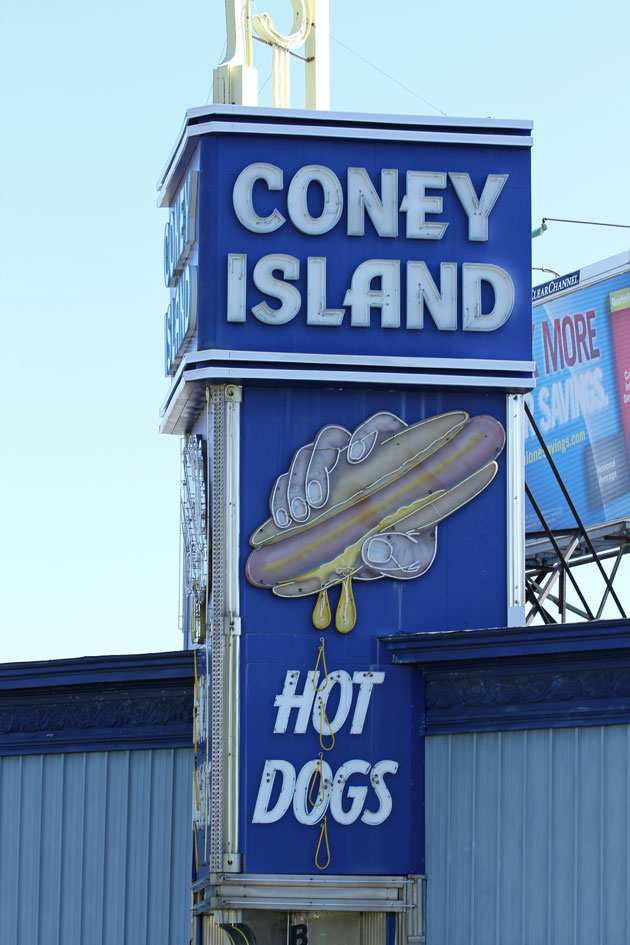 On the Coney Island sign in Worcester, the mustard drips in neon. (Andrew Phelps/WBUR)

The heart is printed on all the street signs in Worcester and on the beautiful stained-glass ceiling of Union Station here in downtown Worcester. It’s the heart of the commonwealth.

What’s news on a chilly Tuesday morning in Worcester — where Morning Edition has been broadcasting live as part of our special Route 9 road trip:

IBM To Buy Marlborough’s Netezza For $1.7B

Computing giant IBM Corp. continued its local shopping spree yesterday, agreeing to pay $1.7 billion for Netezza Corp, a Marlborough firm that makes systems for analyzing massive amounts of corporate data. The deal is the second-largest acquisition of a Massachusetts technology company this year, and the fourth by IBM. (The Boston Globe)

Clark University has become the third local private college to step up and agree to make annual payments to the city in lieu of property taxes. (T&G)

Every weekday, more than 15,000 people find their way between Boston and Worcester by train. The Patrick administration is working to nearly double the number of trains on the line by adding another 10 in each direction. (WBUR)

Anthony Simulynas pleaded guilty Monday in Worcester Superior Court to 16 counts of possessing an infernal machine, two counts of possessing a firearm or ammunition without a firearm identification card, and improperly storing a firearm. Authorities said they seized 85 weapons, about 800 pounds of ammunition and two boxes of suspected explosive devices from the home in February 2009. (AP)