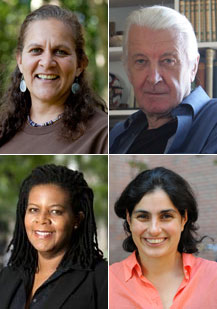 Each one got a surprise phone call with the news that he or she will get $500,000, no strings attached, for being a genius. Pretty sweet.

The Bay Staters are Jessie Little Doe Baird, an indigenous language preservationist in Mashpee; Matthew Carter, a type designer from Cambridge; Annette Gordon-Reed, a historian at Harvard Law; and Nergis Mavalvala, a quantum astrophysicist at MIT.

Carter invented the ubiquitous Verdana (a font I hate) and Georgia (a font I love, which you’re looking at right now). He designed the body text for the New York Times (the newspaper chose from among 19 alternatives) and the Boston Globe.

“There aren’t a great many people around the world who do what I do. It’s a very small profession. We’re not very numerous,” Carter says in a MacArthur video. “My job is to make type that’s readable. Also, I want it to have some sort of quality that is mine.”

Gordon-Reed is the Harvard Law professor who exposed the Thomas Jefferson-Sally Hemmings relationship more than a decade ago — subsequently proved true by DNA tests. “It started as a fascination as a child with Jefferson and Monticello and slavery,” she told NPR’s Ari Shapiro today on Morning Edition.

Gordon-Reed argues that white written history has long been given priority over black oral history. Her next book takes the Hemmings family into the 19th century in an exploration of race.

Baird, of Mashpee, is working to resurrect the lost language of the Wampanoag nation in Massachusetts, a tongue that has not been spoken for 150 years. She has produced dictionaries, phrase books and grammars to help pass on the language to children.

Finally, Mavalvala is a physicist who studies gravitational waves — “fluctuations in space-time curvature that propagate as waves in a pond” — to see further back into the history of the universe than ever before.

Nicholas Benson, a stone carver in Newport, R.I., and Sebastian Ruth, a music educator in Providence, round out the New England representation.

We’ll be looking at the work of these geniuses in greater detail today at 3 on Radio Boston.

Update: In an earlier version of this post, I trashed Verdana in the same sentence I cooed in admiration for Matthew Carter — only to discover while listening to All Things Considered that Carter, in fact, designed Verdana.