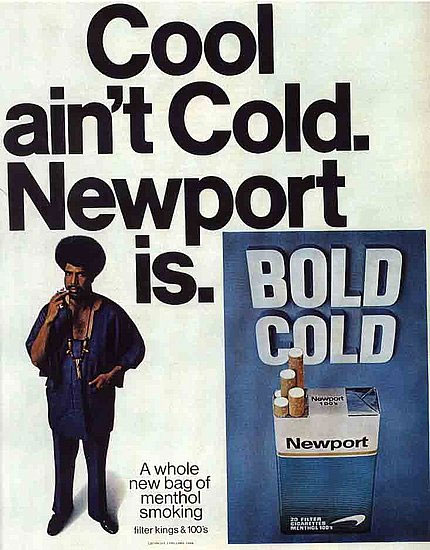 The plaintiffs said Newport ads like this one targeted young, black smokers.

A Boston jury has found a cigarette maker liable for $71 million in a suit alleging the company targeted black children in Roxbury in the 1950s and ’60s.

The plaintiffs had showed jurors a video deposition of Marie Evans, recorded before she died eight years ago from lung cancer. Evans blamed Lorillard, Inc., for getting her and other children in the neighborhood addicted to Newport cigarettes.

Lorillard said it will appeal the decision.

On the school playground, next to the swings and jungle gyms, people would come to hand out free cigarettes to black children. At first, she would trade them to her sisters for candy. By age 13 — envying the woman handing them out — Evans had become a regular smoker.

“She was a very attractive woman,” Evans said. “Model look, look that every young girl wanted to have.” Evans said the woman was dressed “voluptuously … very sexy looking.”

A sexy look, a sexy package — the cigarettes were free and the image of glamorous black smokers offered hope in the dingy projects in Roxbury, Evans said.

The Globe is reporting Lorillard must pay $50 million of the award to Evans’ estate and $21 million to the smoker’s son, William Evans. A scheduled hearing this week could result in a higher cash award for punitive damages.

Update: A spokesman for Lorillard, the defendant, e-mailed me this statement:

Lorillard respectfully disagrees with the jury’s verdict and denies the plaintiff’s claim that the company sampled to children or adults at Orchard Park in the early 1960’s. The plaintiff’s 50-year-old memories were persuasively contradicted by testimony from several witnesses.  The company will appeal and is confident it will prevail once the Massachusetts Court of Appeals reviews this case.