Still looking for a perfect gift for that Pats fan on your list? Unfortunately, you won’t be able to put playoffs tickets under the tree this Christmas. 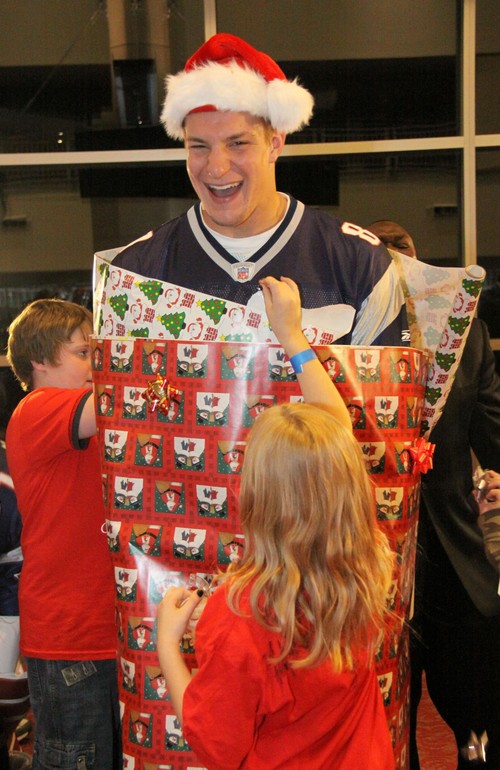 OK, maybe you can put Patriots tight end Rob Gronkowski under the tree, but not playoffs tickets. (Courtesy of New England Patriots)

Though the Patriots have clinched a playoff spot, we don’t know where they’ll be playing yet. (Anyone trying to sell you a playoff seat is a huckster worse than the Patriots’ run defense.)

Thanks to a Pittsburgh Steelers loss on Sunday, the Pats still cling to the top spot in the AFC. Sunday’s win over the Green Bay Packers helps the team’s cause, but won’t inspire much faith in the Pats’ quest for the conference’s No. 1 seed.

At 12-2, the Patriots are tied for the league’s best record. With just one win in their final two games, the Pats will lock down the No. 1 seed and be assured of both a first round bye and home-field advantage for each playoff round prior to the Super Bowl (which is played on a neutral site — this year, in Dallas.)

However, should the Pats lose both of their final two games (versus division rivals Buffalo and Miami) they’ll go on the road in a Wild Card playoff game, probably in either Kansas City or Indianapolis.

Now, the Pats dropping their final two games isn’t likely. The Bills are 4-10 and the Pats clobbered Miami 41-14 in October. Truth be told, and jinxes be damned, I think the roads to the Super Bowl go through Foxborough (in the AFC) and Atlanta (in the NFC.)

So, for all of you last-minute shoppers, maybe an airline gift card will do? Just make sure it’s for a carrier that flies to Missouri, Indiana and Texas.