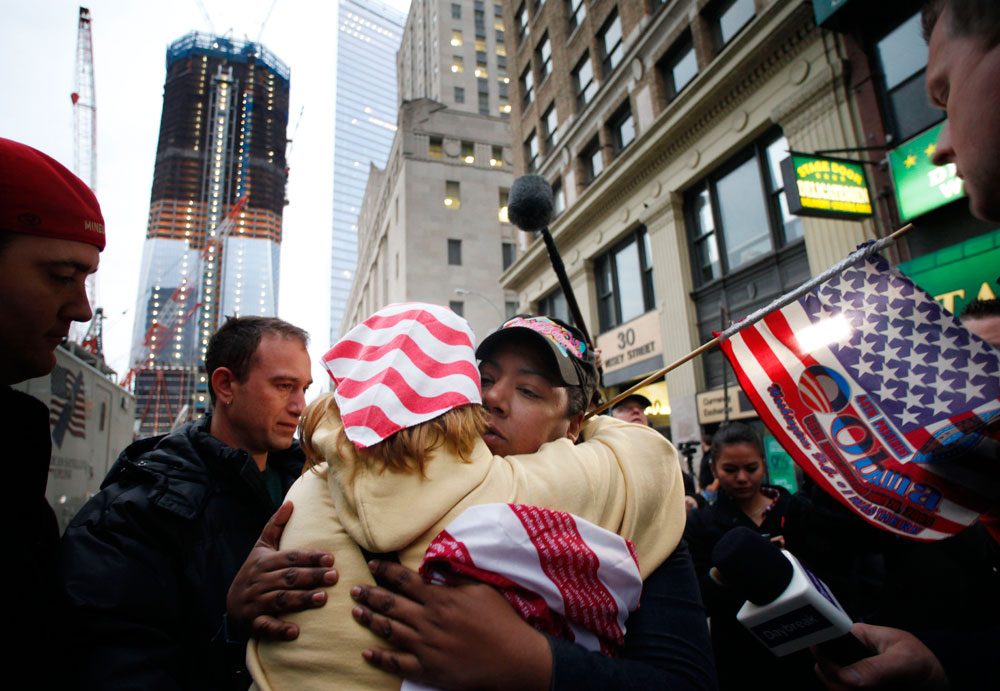 Osama bin Laden’s death — 10 years after the Sept. 11 terrorist attacks — has sparked remembrances of that tragic day. WBUR News Director Martha Little shares her thoughts, and asks for yours.

For many of us, Sept. 11 was a day that triggered many emotions and many profound personal moments. For me it was how the event suddenly changed the view out my window. I lived in Los Angeles at the time, on a house on a hill that had a view of that downtown full of skyscrapers. What once was a lovely view of sparkling buildings became a view of foreboding. I imagined over and over again what it would look like if Boeing 767s and 757s full of passengers were sent careening into those skyscrapers. It was a view full of fear.

Now that I live in Boston, I’m interested to know your reflections, your realizations, your memories of that day. Please share in the comments.

U.S. authorities used “multiple methods,” including DNA matching, to identify Osama bin Laden’s body as one of the dead after the early morning raid in Pakistan.

The AP adds that the officials did not say where or how the testing was done.

That “where or how” is now the focus of questioning.

Boston’s WCVB-TV reports that the DNA used to identify bin Laden’s body was extracted at Mass. General. Bin Laden’s sister died at MGH about a year ago and authorities saved some of her tissue for DNA testing, according to the report.

WBUR’s CommonHealth, however, says that the report has not been verified. “A Massachusetts General spokesperson says that the hospital has checked with multiple sources there and has been unable to confirm any aspect of the ABC report,” CommonHealth’s Carey Goldberg wrote.

It would be easy to identify bin Laden by his sister’s tissue using “commonplace PCR methods,” according to a blog post by the Scientific American. The post’s author, a Cell and Molecular Biology PhD student, reckons that you could identify the body in under five hours.

UPDATE: ABC News has backed off its story a bit. “It is unclear whether bin Laden’s sister, who died of brain cancer in Boston in 2005, was one of the relatives used in the comparison,” ABC’s Katie Moisse wrote in a recent story.

Family members of Sept. 11 victims expressed relief that bin Laden had been killed. Mass. lawmakers from Sen. Scott Brown to Boston Mayor Tom Menino embraced the news but cautioned that the country’s threat from terrorist groups is not over.

The Herald headline sums up a lot of reaction around the country today: We Got Him! For families who lost loved ones in the Sept. 11 attacks, however, bin Laden’s death does little to replace their loss.

The Massachusetts Water Resources Authority will sue several companies in response to the catastrophic water main break that left millions of Boston-area residents without drinkable water.

Murder investigations across the state could be compromised thanks to underfunded coroners, according to the state Office of the Chief Medical Examiner. Dr. Henry M. Nields — the head of the state office — says he can’t provide the right services without hiring more coroners.

Many Massachusetts school buildings were built significantly larger than what is required, according to a new report. The report questions whether communities in the midst of budget crises should close or consolidate schools.

Starting today, anyone with an Internet connection can see what’s going on in Quincy District Court. In an experimental project run by WBUR and funded by the Knight News Challenge, all proceedings will be live-streamed and an on-site blogger will provide full multimedia access. It’s called OpenCourt.us.

The Celtics dropped the first game of their playoff series to the Miami Heat yesterday. The Bruins, who won Game 1 of their series 7-3 Saturday, face off against the Philadelphia Flyers again tonight.