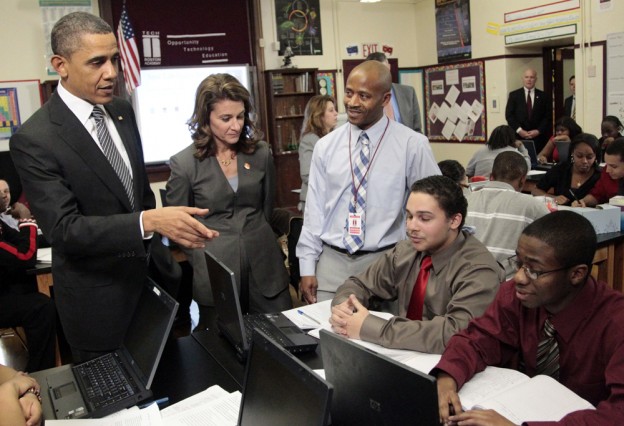 President Obama talks to students during his visit to classrooms at TechBoston Academy with Melinda Gates in Boston last March. (AP)

President Obama is returning to the Bay State tonight to raise money for his 2012 re-election campaign.

After delivering the commencement speech at the U.S. Coast Guard Academy in New London, Conn., the president will head to Boston for two fundraising events where he could raise over $2.2 million, according the Boston Globe. That would more than double what he raised during a visit in March.

Obama’s first appearance will be at an event sponsored by the Democratic National Committee at the Boston Center for the Arts in the South End, featuring Celtics guard Ray Allen and Hall of Famer Bill Russell.

After the South End fundraiser, Obama will attend a private dinner at the Brookline residence of advertising executive Jack Connors.

The Globe’s Donovan Slack will be following Obama all day but the Boston Herald was denied a spot as the pool reporter, according to the paper.

White House spokesman Matt Lehrich’s cited the editorial written by Mitt Romney that the Herald printed on the front page on the day Obama last visited Boston as one of the reasons why the paper wasn’t chosen for pool duties.

The Herald printed part of Lehrich’s response to the Herald’s request for full access:

“I tend to consider the degree to which papers have demonstrated to covering the White House regularly and fairly in determining local pool reporters… My point about the op-ed was not that you ran it but that it was the full front page, which excluded any coverage of the visit of a sitting US President to Boston.”

Lehrich insisted that the paper wasn’t barred from the press pool, but that local pool duty by the Boston Globe was arranged with the White House Correspondents Association.

According to the president’s schedule, Obama should be delivering remarks at the Cyclorama at 6:15 p.m. and in Brookline at 8:25 p.m. Tremont Street is prepping for the visit, but all of Boston should anticipate a tough evening commute as the presidential motorcade rolls through town.

Follow WBUR’s Fred Thys (@fredthys) who will be tweeting live from the event in the South End.

Are you cancelling any plans to avoid the traffic? Are you heading downtown to try and catch a glimpse of the president? We want to hear from you in the comments.

More than 200,000 people across the state could become victims of identify theft after a data security breach at the state’s Division of Unemployment Assistance and Career Centers. A computer at one of the centers was infected with the Qakbot virus on April 20, according to state Labor Secretary Joanne F. Goldstein.

For the second time so far this year, Boston will get the presidential treatment. President Obama is expected to head into town tonight for fundraisers at the Boston Center for the Arts and at the Brookline home of advertising mogul Jack Connors.

The Navy’s elite police unit is helping investigate the case of the unidentified dead boy in Maine, after authorities revealed that a witness saw a license plate with a Navy emblem on it near where the body was found.

The federal corruption trial of former House Speaker Salvatore DiMasi and two co-defendants is expected to take a dramatic turn today, when Joseph Lally, a former sales agent for Cognos Software, takes the stand. Lally has pleaded guilty to being a part of the kickback scheme as part of a plea deal with prosecutors.

What we’re following: We’ll continue to report on the journalists with Boston ties being held in Libya, the municipal health care debate on Beacon Hill and developments in the trial of Nancy Kerrigan’s brother.