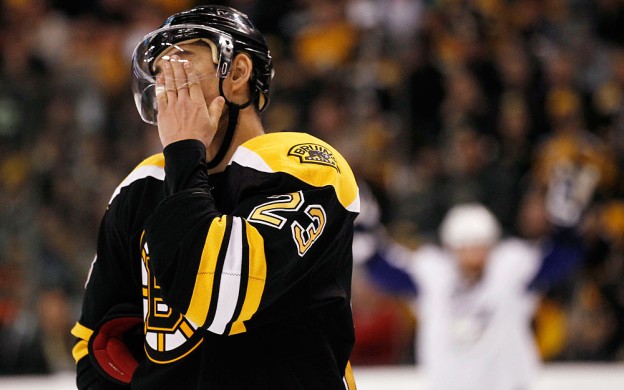 The Boston Bruins' Chris Kelly skates away as a Tampa Bay Lightning player celebrates a goal during Game 1 of the Eastern Conference finals. (AP)

Tell me if you’ve seen this movie before.

On Saturday night, the Boston Bruins played a pivotal playoff game as if it was nothing more but a regular season matchup. They played without any of the intensity, emotion, or urgency that would lead you to believe that four wins would get them to the Stanley Cup Finals.

Game 1 of the Stanley Cup semifinals at the TD Garden against the Tampa Bay Lightning was oh-so-reminiscent of the Bruins’ first game against the Montreal Canadiens in the opening round of this year’s playoffs. Despite the high stakes and electric atmosphere before the puck dropped, the team Bruins fans were excited to see seemed nonplussed.

Everything the Bruins did right in their previous series against the Philadelphia Flyers, they did wrong on Saturday. They seemed tentative and defensive and made mistake after mistake — perhaps none more glaring than Tomas Kaberle’s first period turnover that led to Teddy Purcell’s score, giving the Lightning a quick three goal lead.

Unfortunately, the poor play didn’t stop there. Goalie Tim Thomas had been on a hot streak, but seemed to take a step backward in Game 1. Tampa Bay’s first score, by Sean Bergenheim, followed multiple errors. Thomas thought he had the puck tied up under his glove, but it slipped out to his right. Dennis Seidenberg lost his stick on the play and kicked the puck right to Bergenheim, who put it in.

Not even 20 seconds later, Thomas allowed a soft goal on Brett Clark’s backhander from a bad angle — a puck he has to stop. At that point, it was basically lights out on the first game of the series.

END_OF_DOCUMENT_TOKEN_TO_BE_REPLACED 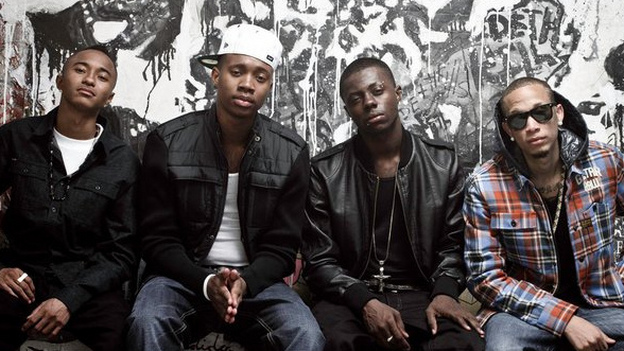 M-Bone (far right) of Cali Swag District, was killed in a drive-by shooting on Sunday night in Inglewood, Calif. The other members of the group, from left to right: Jay Are, C Smoove and Yung. (Courtesy of EMI)

One day after making an appearance in Dorchester, one of the members of hip-hop group Cali Swag District was killed in a drive-by shooting in Inglewood, Calif.

The 22-year-old Montae Talbert, also known as M-Bone, was the main dancer in the group. He died Sunday night. The four group members were in Dorchester on Friday and Saturday for a scheduled appearance at the Chez Vous skating rink.

The group’s popular ‘Teach Me How to Dougie’ song brought back the famous dance of rap legend Doug E. Fresh — everyone from first lady Michelle Obama to Justin Beiber have danced to the song. As NPR reports, the dance craze has been viewed over 50 million times on YouTube.

After supporting the GOP budget proposal, Sen. Scott Brown’s stance on Medicare is coming under critics’ fire. The plan would transform Medicare into a voucher system.

The chief of staff for Massachusetts House Speaker Robert DeLeo takes the stand today in the federal corruption trial of former House Speaker Sal DiMasi. Yesterday, prosecutors tried to show that DiMasi had money problems when he was the leader of the House.

The Winklevoss twins are taking their suit against the founder of Facebook to the Supreme Court. Cameron and Tyler Winklevoss allege that Facebook and founder Mark Zuckerberg lied about the value of the company in the settlement of a 2008 lawsuit the twins brought against the social media giant.

Two-thirds of the Boston-based ’80s indie band Galaxie 500 are still touring together. Damon & Naomi have a new album out today.

So, this is the Adrian Gonzalez we were told to expect. The big-swinging first baseman continued to lead the team’s resurgence last night, belting a ninth-inning walkoff two-run double.

The Bruins will look to even their playoff series with the Lightning at one game apiece tonight at the Garden. Many pundits say that rookie Tyler Seguin will have to make his presence felt for the team to notch a win.

What we’re following: We’ll continue to report on developments in the DiMasi trial, the Boston-based journalists that could soon be freed from Libya and the burial of an Auburn man who was killed in Afghanistan. Radio Boston will talk about a taboo issue that affects many — sex after cancer treatments.