Two young men were killed, a handful of other victims were shot and over 100 police officers reportedly descended on South Boston’s Carson Beach to break up fights over a violent Memorial Day weekend in Boston.

At nearly 10 p.m. Sunday, city police found a 20-year-old man suffering from an apparent gunshot wound in Dorchester. Just over a half an hour later, they discovered a second shooting victim, 22, in Mattapan. Both young men were later pronounced dead, becoming Boston’s 12th and 13th homicide victims of the year — and fourth and fifth victims this month.

From Friday morning to this morning, BPD reports, there were also six non-fatal shootings.

From a State Police statement:

Initially, three Troopers responded and upon their arrival observed several youths from rival Boston Gangs fighting. The intelligence now reveals there was approximately 1,000 youths ages between the ages of 14-19 years gathered around … the participants of the fights. Troopers immediately requested assistance from all available Troopers, Boston Police, Transit Police, and U Mass Police.

The Boston Globe reports there were more than 100 police officers on scene, and that subsequent fights broke out near T stations as the teens fled the beach. State Police told the Globe there were no serious injuries resulting from the fights.

The website the Drudge Report today has featured the “gangs unleashed” on Carson Beach story. We’re following up the beach fights with coverage on Radio Boston today.

The Dorchester Youth Collaborative told Radio Boston that no actual gangs were at the beach fight.

State Police say they are increasing their presence on beaches in South Boston. The extra police includes uniformed and plainclothes troopers, canine units and both gang and auto-theft task forces.

WBUR’s Bianca Vazquez Toness reports the Carson Beach incident may not have been gang-related at all. 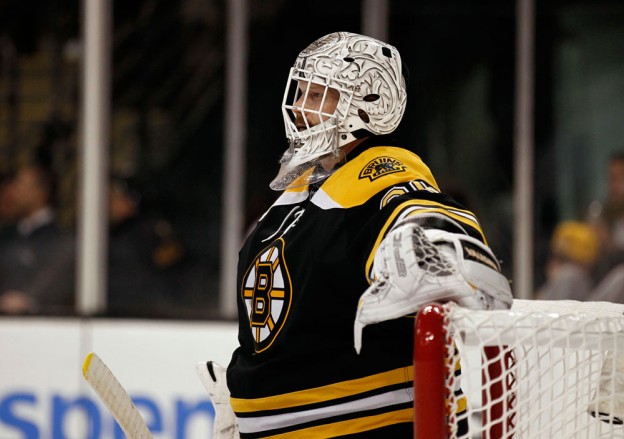 Bruins goalie Tim Thomas shut out the Lightning Friday to propel his team to the Stanley Cup Finals. (AP)

It’s been a weekend and I’m still exhausted from the tension of a classic 1-0 Game 7 of playoff hockey.

Standing on the ninth floor Friday and looking down at the ice with three minutes left in the game and remembering that feeling back in 1990 when the Bruins beat the Hartford Whalers, Montreal Canadiens and the Washington Capitals to advance to the NHL Finals for the second time in three years. Although I was a media member, I was also a fan and it was a great time to be a Bruins fan.

Little did I know that I would not get a chance to have that emotion for another 21 seasons. But Friday night at TD Garden, it was a really good feeling. With 1:13 left in the game, the crowd felt it, and the guttural screams of all those years were released — it was indeed the loudest noise I had ever heard in that building since its birth.
END_OF_DOCUMENT_TOKEN_TO_BE_REPLACED

The lead lawyer at the troubled state Probation Department has been fired. According to the Globe, the acting Probation commissioner ousted Christopher Bulger, saying he “violated his professional duty.” Bulger’s attorney called the firing “outrageous” and is planning an appeal.

State Police say 1,000 teenagers from rival gangs gathered for a fight on Carson Beach in South Boston yesterday. After more than 100 officers from multiple law enforcement agencies responded, many of the youths boarded trains at JFK/UMass station and fought at T stations around the city.

Persistent water leaks are causing a host of problems inside the Big Dig tunnels. According to the Boston Herald, inspection reports show the leaks are at least partially to blame for crumbling concrete, corroded lights and damaged fire-proofing. The state is spending about $12 million a year to combat the leaks.

I guess you could say the CEO of LipimetiX, a Sudbury-based drug company, has a corner office. Dennis Goldberg runs the company out of one corner of his home’s living room and is part of a new trend in the pharmaceutical industry: one-person drug firms.

What we’re following: We’ll continue to report on the trial of former House Speaker Sal DiMasi, the 12-year-old girl who was swept out to sea by a riptide yesterday and the education bills up for debate on Beacon Hill.