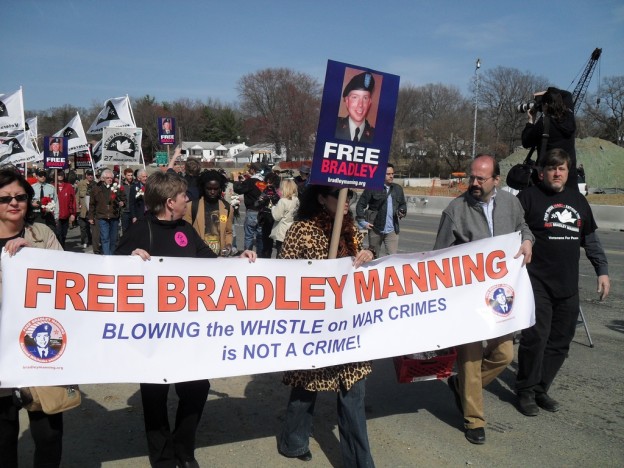 Members of the Bradley Manning Support Network march in a protest against Manning's detention in March. (K_Young_NYC/Flickr)

In November, the Department of Homeland Security detained House at O’Hare International Airport in Chicago and questioned him about his association with Manning and the anti-secrecy website Wikileaks, according to the suit, which further claims two DHS officials confiscated House’s laptop, thumb drive and video camera.

“The seizure of my laptop had a very chilling effect on the activities of The Bradley Manning Support Network,” House told WBUR. “[It has] silenced people working [for the the group] and sent many of our donors into retreat.”

END_OF_DOCUMENT_TOKEN_TO_BE_REPLACED

The FBI is searching a home in Dorchester this morning.

According to the FBI, agents are conducting “authorized activity,” but the agency won’t specify what that is or who the target might be.

WBUR’s Fred Thys is at the scene and will be providing updates. Witnesses tell Thys one arrest has been made.

The Globe reports that the Boston Police Department is working in concert with the FBI, but a spokesman for the BPD was not able to confirm that to WBUR.

UPDATE (11 a.m.): The FBI searched a house on Devon Street in Dorchester. According to area neighbors, the house belongs to a police officer, Thys said.

According to documents on the Suffolk County Registry of Deeds website, the house belonged to Vincent H. Stephens, but was foreclosed upon and now belongs to the Bank of New York. Thys is checking with BPD to see if Stephens is on the force.

Mitt Romney yesterday defended the universal health care bill he signed into law as governor of Massachusetts. In a speech in Ann Arbor, Mich., Romney addressed what critics say could be his presidential campaign albatross, endorsing the Massachusetts law while distancing himself from the recently passed federal health care law.

As Massachusetts lawmakers prepare to carve up the state’s legislative districts, minority groups are making sure they are being heard early in the redistricting process. The Legislature’s Redistricting Committee will hold another of its regional hearings tomorrow.

Massachusetts residents will have their last chance tomorrow to weigh in on Secure Communities, a controversial immigration program. WBUR’s Bianca Vazquez Toness reports that many states may try to back out of the federal program.

What if I told you that you could grow a lush, green lawn in poor soil and you wouldn’t have to mow it that often? Jackson Madnick, an inventor from Wayland, designed a new grass seed that he says can do just that.

Throughout the playoffs, many assumed that this year would be coach Doc Rivers’ last year on the Celtics bench. According to the Associated Press, however, the team and the coach are working on an extension that would see Rivers coaching the green for many more years.

What we’re following: We’ve sent a reporter to an FBI raid currently in progress in Dorchester. We’ll continue to report on jury selection in the trial of Nancy Kerrigan’s brother and the U.S. Agriculture Secretary’s visit to Boston.