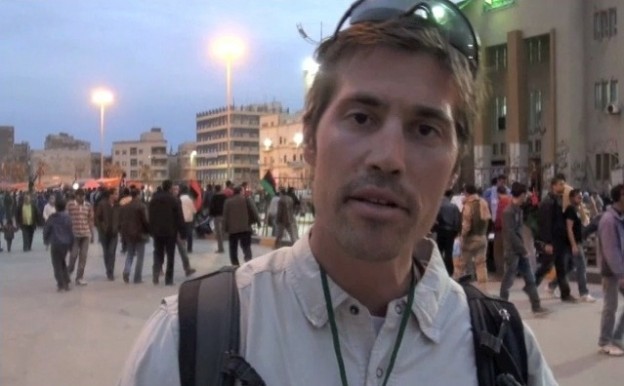 A screengrab of James Foley reporting from Libya. (Courtesy GlobalPost)

It’s Day 36 for four journalists detained in Tripoli, Libya. And for the first time, the two American journalists were able to receive a visitor — an intermediary who said they are in good health.

James Foley, of New Hampshire, was one of the reporters who was arrested in Libya on April 5 by forces loyal to Moammar Gadhafi while covering the conflict near the eastern town of Brega. He’s a correspondent for the Boston-based news agency GlobalPost.

GlobalPost CEO Phil Balboni told WBUR that a diplomat was able to meet with Foley and fellow captive Clare Morgana Gillis, a Harvard graduate who has written for USA Today and The Atlantic.

“I can’t imagine that there’s any stone that’s been left unturned here to try to get them home, and we do hope that they will be home soon,” Balboni said.

The two are in good health, according to a GlobalPost report, and Balboni said the indications are that they will be released soon.

END_OF_DOCUMENT_TOKEN_TO_BE_REPLACED

Sal DiMasi’s longtime law associate, compelled by federal prosecutors to testify against the man he calls his mentor, took the stand yesterday as a key witness in the former House speaker’s corruption trial. The government alleges Steven Topazio, who is not on trial, funneled payments to DiMasi from a software company hoping to receive a state contract.

The content of ads on T property will be examined more closely, according to the MBTA, after T riders complained about the “Judgment Day” ads seen around town. A group called Family Radio sponsored a nationwide ad campaign claiming that the end of days is approaching — on May 21, to be exact.

Dee Dee Milton traveled from Revere to Kathmandu, Nepal, to adopt a daughter. After she took custody, however, she couldn’t get her daughter a U.S. visa after the U.S. shutdown all adoptions from Nepal, alleging corruption and fraud. Months later, she and her daughter are home in Revere, confounded by confusing U.S. policy.

State Police last night arrested a man on the tarmac at Logan who had allegedly tried to open a plane door mid-flight. Witnesses said the man appeared to be drunk and that the flight crew removed the man from the exit row of the Orlando to Boston flight.

The Celtics face a must-win game in Miami tonight, down 3-1 in their playoff series against the Heat. Is this the end for Kevin Garnett, Ray Allen, Paul Pierce and company?

What we’re following: We’ll continue to report on a possible tax on soda, the vigil for reporters being held in Libya and the Constitutional Convention on Beacon Hill.