As the federal corruption trial of former House Speaker Sal DiMasi entered its third week today, WBUR’s David Boeri recaps the case so far, with the help of sketches by Margaret Small.

Background: In 2006 and 2007, a Canadian software company called Cognos won two contracts from the state worth $17.5 million. According to federal prosecutors, the contracts came off as the result of a scheme whereby Speaker DiMasi “found a way to cash in on that office.”

As “kickbacks” for steering the contracts to Cognos, the government alleges, DiMasi and his associates and close friends Richard McDonough and Richard Vitale received hundreds of thousands of dollars from software salesman Joe Lally.

Lally, who won millions of dollars of sales commissions on the contracts, has plead guilty to the charges of conspiracy and honest services mail fraud. As a condition of his plea deal, he has agreed to testify against his former co-defendants. In return for his testimony, Lally will receive a recommendation for a reduced prison sentence and the government allowed him to keep his home and other assets, which would have been otherwise forfeited.

The maximum sentence on all the charges against the defendants amounts to 165 years. DiMasi, McDonough and Vitale all assert their innocence. 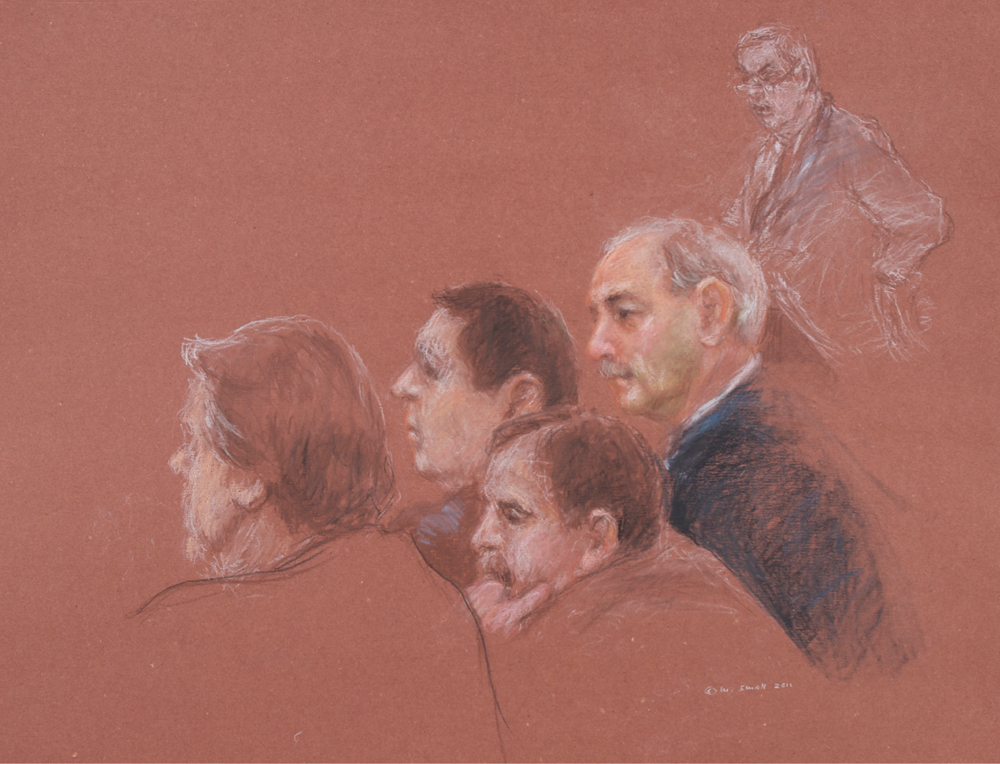 From left to right: defendant Richard — everyone calls him “Dickie” — McDonough, a well-known lobbyist on Beacon Hill and close friend of DiMasi; William Cintolo, DiMasi’s attorney; Tom Drechsler, McDonough’s attorney; DiMasi, most often referred to as “Sal” or “The Speaker”; and Tom Kiley, co-counsel for DiMasi. 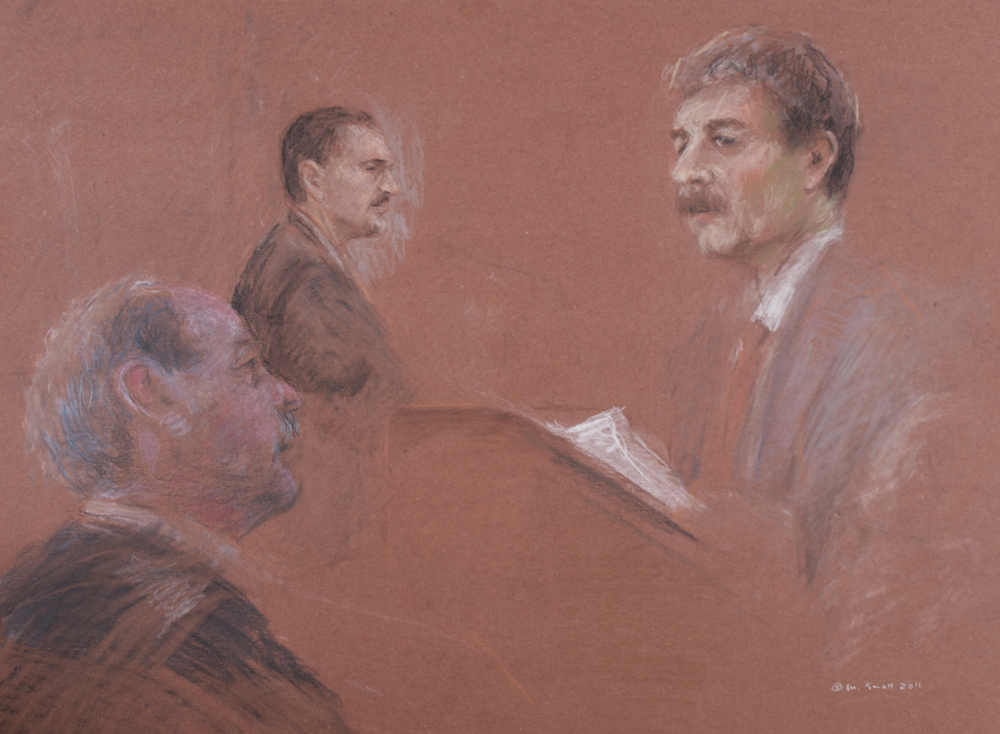 “Did you ever get any other clients referred to you by Mr. DiMasi for whom you did no work?”

[From the defense table] “Objection!”

A law associate of DiMasi, Topazio was paid $5,000 a month by Cognos on a contract for which he was never asked to do any work. He testified that he paid $4,000 a month to DiMasi — $65,000 in all — thinking that was DiMasi’s share for referring the client. The government says the money was a series of kickbacks from Lally disguised as consulting fees to Topazio.
END_OF_DOCUMENT_TOKEN_TO_BE_REPLACED

I had all intentions of writing something praising Claude Julien for such a wonderful job this season in coaching the Boston Bruins to within two games of the Stanley Cup Finals. After all, I was never fond of his hiring, and over the past four-plus years behind the Bruin bench nothing really has changed my mind. 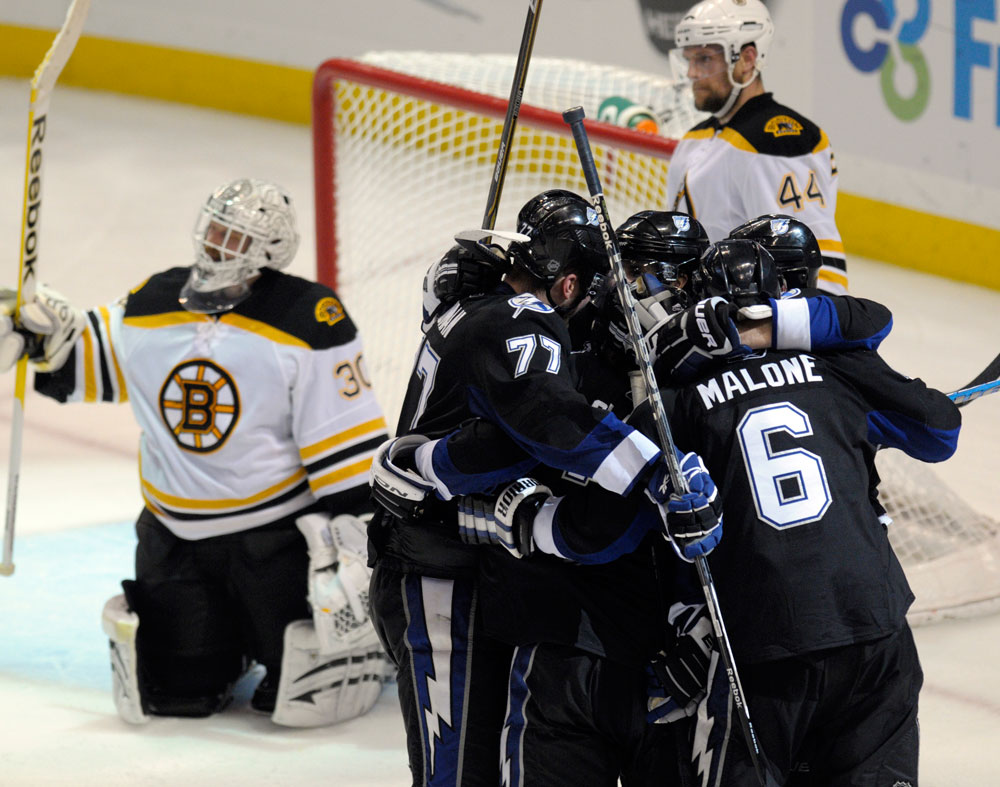 The Lightning celebrate a goal as Bruins Tim Thomas, left, and Dennis Seidenberg react during Game 4 of the Eastern Conference finals Saturday in Tampa. (AP)

Then there was Saturday. The Apocalypse, The Rapture, the end of the world as we know it, and nothing was fine. The Bruins lost Game 4 of the Eastern Conference Finals against the Lightning in Tampa Bay and now the series is tied, 2-2.

It wasn’t that they loss, it was how they lost. Let’s review: The Bruins scored three first period goals, including two unassisted by Patrice Bergeron and one of those shorthanded. 3-0 Boston after one period. At that point, the Bruins decided to hop their charter and fly back to Boston with thoughts of clinching at home, while the Lightning played the final two periods all alone and came back to win 5-3. Best-of-three series.
END_OF_DOCUMENT_TOKEN_TO_BE_REPLACED