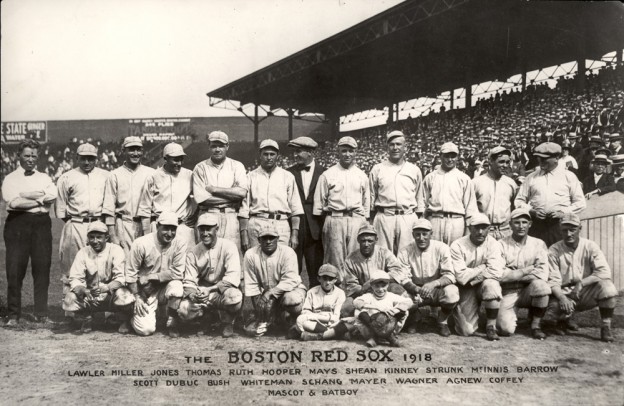 Don’t do a double-take while watching the Red Sox game tomorrow night. There’s no Model T in your driveway, by George, the Sox and the Chicago Cubs will just be wearing throwback uniforms.

The Cubs are in town this weekend for the first time since 1918, when the Sox vanquished Chicago’s north-siders to win the World Series.

On Sept. 11, 1918, the Sox beat the Cubs 2-1 in the series’ deciding sixth game. Some allege the Cubs threw the series, just like the Chicago “Black Sox” did a year later. Regardless, the Sox brought home the banner.

Boston’s hero that day? Actually, it was Cubs rightfielder Max Flack — he committed the error that led to the Sox’ only runs.

Back then, there was no Curse of the Bambino. Instead, the Sox were somewhat of a juggernaut, according to the Boston Daily Globe of Sept. 12, 1918. Here’s the paper’s lede for “Red Sox Win Sixth Game And The Title”:

Boston is again the capital of the baseball world, history repeating itself yesterday when the Red Sox, who have never faltered in this great classic, defeated the Cubs, 2 to 1.

Besides, Babe Ruth pitched the Sox to wins in Games 1 and 4 of the series.

Boston has kicked the Curse of the Bambino, but star-crossed Cubs fans continue to suffer. Maybe facing up to the team’s traumatic Fenway Park experiences is just what The Babe, and the doctor, ordered.

Thanks to reader @nsmorrow for help in researching this post

Authorities said yesterday they had uncovered a massive scheme that defrauded the MBTA out of millions of dollars. Attorney General Martha Coakley accused a Revere man of fabricating “ghost” MBTA passes that looked and worked like the real thing, and of selling them online and keeping the profits.

Even as defense attorneys worked to portray him as a liar and a cheat, former software salesman Joseph Lally continued to testify that he was part of a scheme that funneled kickbacks to former House Speaker Sal DiMasi. Lally has already pleaded guilty to charges connected to the scheme.

The bizarre case of the man sometimes known as Clark Rockefeller (nee Christian Gerhartsreiter) is back in the news. Gerhartsreiter’s lawyer said yesterday that his client won’t fight Los Angeles County prosecutors’ efforts to extradite him to California to face murder charges.

A tireless advocate for the nation’s only publicly funded art college, MassArt President Kay Sloan will follow the school’s students in moving on after commencement. Sloan is retiring after 15 years on the job.

Boston University will honor Nina Totenberg, NPR’s legal affairs correspondent, with an honorary degree. Totenberg studied journalism at BU, but left before graduating to embark on her now legendary career.

What we’re following: We’ll continue to report on a new contract for nurses at Tufts Medical Center, developments in the trial of Nancy Kerrigan’s brother and the preparations for what could be a busy hurricane season.