Never pick a fight with someone who buys ink by the barrel.

Even in the euphoria of his 16th straight victory Tuesday night, Democratic Rep. Barney Frank took on “the media” and the Boston Herald. “Massachusetts has reaffirmed the complete political irrelevance of the Boston Herald,” he said to cheering supporters.

“There was no limit to the bias and vitriol they unleashed, and it had no impact. So good for Massachusetts.” (The comment comes at the 3:48 mark of this video.)

Indeed, in Barney’s opinion the Herald was too frank. Take the “news story” printed Oct. 21, in which a reporter calls the congressman “panic-stricken” after he lent $200,000 to his own campaign. (As Universal Hub noted then, the Herald ran that story on its front page — instead of the politically explosive statement from a strip-search victim who condemned Republican Jeff Perry, the 10th congressional candidate.)

Frank won re-election by a margin of 11 percentage points. 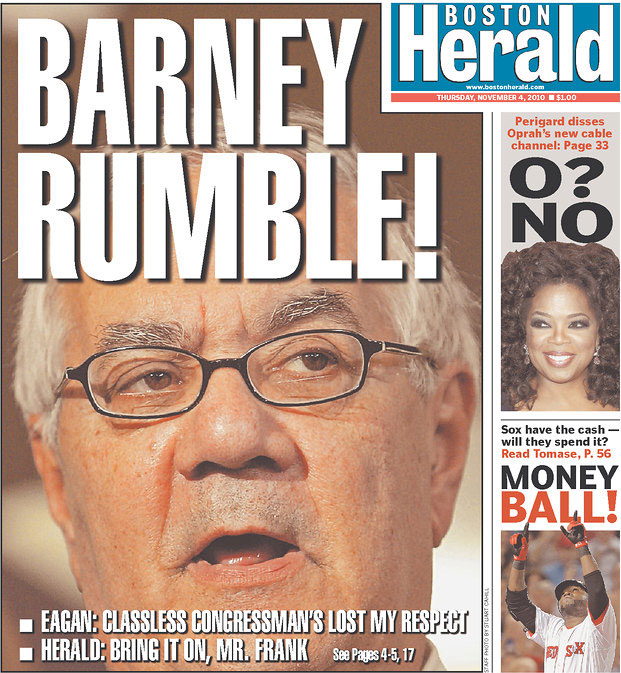 In a two-byline story today, Herald publisher Pat Purcell and editorial page editor Rachelle Cohen declare a war of words with “Mr. Congeniality” for the next two years.

After weeks of attempting to keep his basic nastiness and contempt for voters in general and the media in particular in check, Frank could finally let loose. Oh sure, the Herald and then Fox News were his main targets, but, let’s face it, Barney isn’t what you would call a man of great personal warmth and charm.

What, does he not own a mirror? Is he incapable of introspection? Has he never seen YouTube’s collection of his best TV hissy fits?

Barney seemed to have forgotten: He won. Big. And he was lucky he did.

The contrast between a nasty, bitter Frank and his grateful, graceful opponent, Sean Bielat, could not have been more stark.

A Herald cartoon depicts Barney Frank as Barney Rubble, a caveman who destroyed the U.S. economy with his mallet. Howie Carr says Frank is the one who’s irrelevant.

And of course the Herald takes Frank to task for his partner’s heckling of Bielat during a talk with reporters — something WBUR’s Fred Thys witnessed and a Herald staffer captured on video:

So who needs to lighten up — Barney Frank or the Boston Herald?

Thursday at 3 on Radio Boston:

Justice Roderick Ireland is appointed as chief justice of the SJC. We talk to court observers about Gov. Deval Patrick’s appointment for Massachusetts’ highest court. Ireland was first appointed in 1997 and, if confirmed, would become the first black chief justice.

Political fallout elsewhere in New England. Massachusetts went all blue Tuesday, but what about in Rhode Island, New Hampshire, Maine, Connecticut and Vermont? We talk to reporters from the rest of New England to discuss the wins, losses and surprises.

An archaeological dig near Faneuil Hall. WBUR’s Adam Ragusea visits what used to be the town dock. Lots of nautical paraphernalia is turning up.

Electric harpist Deborah Henson-Conant. She performs on her new ultra-light carbon fiber harp, ahead of a performance this weekend.

Gov. Patrick says he will definitely serve all four years. But this term will be his last. (WBUR)

Knocking on doors got Democrats to the polls. “Of all the things that went right for Patrick Tuesday, one big one was Menino’s legendary machine.” (Globe)

Charlie Baker has options. “Baker will probably have numerous options in the private sector, and he appears to have the financial means to consider his next step carefully.” (Globe)

Yesterday’s Hyde Park home explosion was caused by a contractor hitting a gas line with a backhoe. “‘I was getting calls on my cell phone that the house blew up. I couldn’t comprehend it,’ said the homeowner, Mike Burns, 47.”