Monica Gaudio is “flabbergasted” by her sudden fame — and says her story shows the Internet’s tremendous capacity for both goodness and meanness. 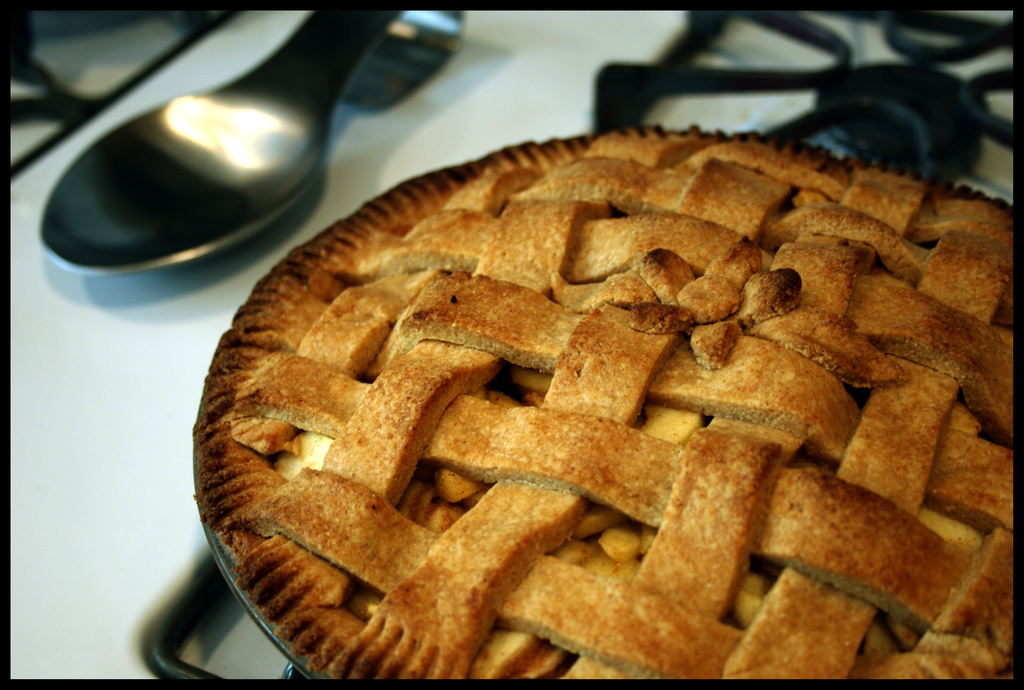 “I did not want to become an Internet celebrity,” she told me in a phone interview, as Canadian radio waited on the other line. “This is not what I want my life to be.”

Gaudio clarified that she is 40, not a young college student, and lives in Arlington, Va. She is an avid fan of medieval food, fencing, sewing, calligraphy and music.  Her allegedly ripped-off article was about half-century-old recipes for apple pie that she decided to bake at home — an article she won an award for, thank you very much.

As I wrote earlier, Gaudio is crying plagiarism after a small magazine in western Mass. called Cooks Source printed — without permission — an article she wrote about apple pie. Gaudio complained about it on her LiveJournal for an audience of one or two dozen people.

Gaudio received an unbelievable non-apology from the magazine’s editor and published it on her blog. An excerpt:

Monica, the web is considered “public domain” and you should be happy we just didn’t “lift” your whole article and put someone else’s name on it! It happens a lot, clearly more than you are aware of, especially on college campuses, and the workplace. If you took offence [sic] and are unhappy, I am sorry, but you as a professional should know that the article we used written by you was in very bad need of editing, and is much better now than was originally. Now it will work well for your portfolio.

The editor goes on to say that Gaudio should be paying the magazine, not the other way around.

“After that letter, I did not believe there was anything that I could say to her to change her mind,” Gaudio told me. So the correspondence stopped.

Gaudio’s blog post spread like wildfire on Reddit and elsewhere on the Web, and the Justice Seekers of the Internet flooded the Cooks Source Facebook page with numerous other examples of the magazine’s apparent plagiarism.

“I love the Internet. I love the crowdsourcing. I love … how quickly things got done,” Gaudio told me. Without the Internet, that kind of research might have taken months.

“On the other hand, there’s been lots of really harsh things that have been said, and that was not my intention at all,” she said. (“Cooks Source is a cheese fondouchebag,” one commenter writes. “Cooks Source borrows your lawn mower and returns it out of gas,” writes another.)

She is dismayed by reports that people have contacted magazine advertisers to complain.

“That’s not cool. They’re small businesses. They’re doing what they can to promote their businesses. I would ask that people be nice. Follow the golden rule,” she said.

You can listen to my interview with Gaudio at 3 p.m. Monday on Radio Boston. 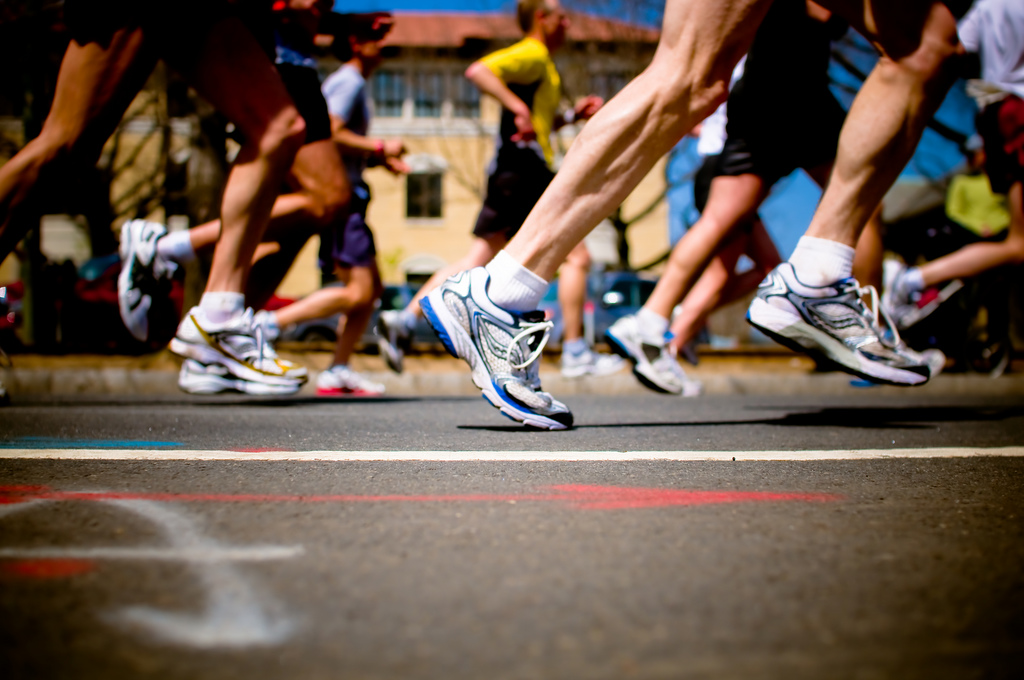 We go the distance.

The Daily Beast analyzed data from hundreds of thousands of runners in 19 cities to determine that Bostonians run more miles per week (7.85, on average) than anyone else.

The Beast partnered with Daily Burn, a popular website and iPhone app that lets runners record stats about their workouts. Boston’s popular running spot? The Charles River, of course.

Baltimore-Washington comes in at No. 2, Los Angeles at 3 and my home town of San Diego at 10.

The Beast article erroneously calls the New York City Marathon “the Super Bowl of competitive running” — I beg to differ. (I would remind you that registration for the 2011 Boston Marathon filled up on Day 1.)

Of course, the Beast’s findings could be skewed by the high density of college students here — younger and perhaps more tech-savvy than runners elsewhere.

If you’re interested in using technology to track your workouts, you might also check out RunKeeper — another popular website and mobile app, coded right here in Boston by developer Jason Jacobs. The app allows you to record your route on a map and even assess your fitness over time.

Where do you like to run in and around Boston? Do you use tech to track your fitness?

Thiago DeJesus, the owner of a flight school in Stow, was arrested Friday along with 33 of his students for being in the United States illegally.

Details are sparse and the newsroom is working on it. Here is what we know:

The federal agencies involved are pointing fingers at one another. The FAA says this is an Immigration and Customs Enforcement (ICE) investigation. ICE says this is a TSA matter, since the TSA performs clears pilots to take flight lessons.

The TSA released this statement:

TSA performs a thorough background check on each applicant at the time of application to include terrorism and other watch list matching, a criminal history check and checks for available disqualifying immigration information. This matter has prompted a review of the process through which foreign nationals obtain clearance to take flight lessons and acquire pilots’ licenses.

As the Boston Globe reports, the case raises new doubts about the effectiveness of the nation’s antiterror net:

In 2008 ABC News reported that thousands of foreign nationals were obtaining pilot’s licenses without the proper paperwork.

Officials at TSA and the Federal Aviation Administration, which issues pilot’s licenses, could not explain this week why alleged illegal immigrants were allowed to take classes and obtain pilot’s licenses in Stow.

DeJesus denies that he is in the United States illegally.

Friday at 3 on Radio Boston:

I talk about the overheated controversy about Cooks Source magazine. The small, free cooking magazine is accused of widespread plagiarism — and defending the practice.

The Agbekor Drum and Dance Society. The group performs the music of a West African tribe in advance of a concert this weekend.

On her blog, Gaudio called out the magazine for plagiarism and published a (breathtaking) response she says she received from Judith Griggs, the editor of Cooks Source.

The Internet jumped to Gaudio’s defense, overwhelming the Cooks Source Facebook page with numerous past examples of the magazine’s apparent plagiarism — including an NPR story about ice cream. (See the original and the magazine version.)

Now some Cooks Source advertisers, mostly local businesses, are withdrawing their ads and asking the Internet to be kind to them, say they knew nothing of the magazine’s journalistic malpractice. 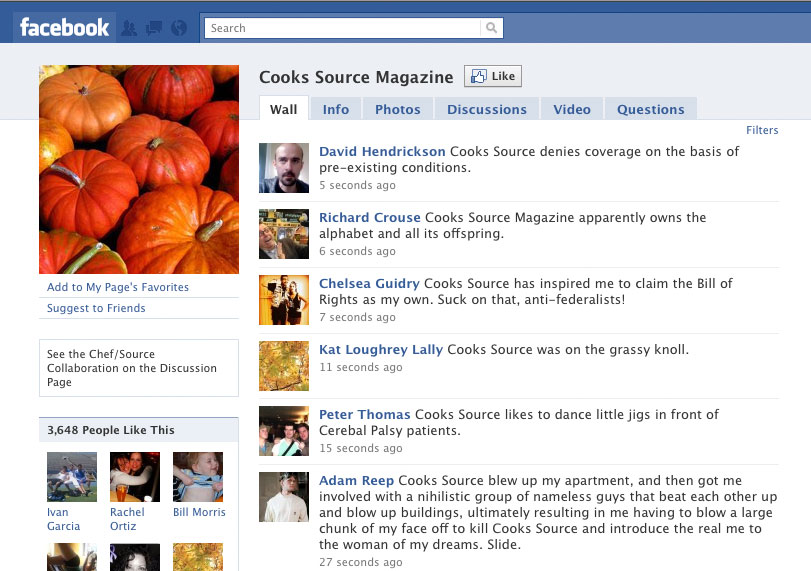 (I have since interviewed Gaudio; I misunderstood.)

A person purporting to be Griggs, the magazine editor, responded on Facebook — “Well, here I am with egg on my face!” —  but Gaudio wonders if that’s fake.

Here is an excerpt of the e-mail Gaudio says she received from Griggs, the Cooks Source editor — the e-mail that started the frenzy:

…honestly Monica, the web is considered “public domain” and you should be happy we just didn’t “lift” your whole article and put someone else’s name on it! It happens a lot, clearly more than you are aware of, especially on college campuses, and the workplace. If you took offence [sic] and are unhappy, I am sorry, but you as a professional should know that the article we used written by you was in very bad need of editing, and is much better now than was originally. Now it will work well for your portfolio. For that reason, I have a bit of a difficult time with your requests for monetary gain, albeit for such a fine (and very wealthy!) institution. We put some time into rewrites, you should compensate me! I never charge young writers for advice or rewriting poorly written pieces, and have many who write for me… ALWAYS for free!

In the e-mail, the magazine editor acknowledges it was “my bad” and that she was probably just tired.

I’ve reached out to Monica Gaudio to see if I can get the full story, and my colleague has tried calling Cooks Source. Until then, you can judge for yourself — the Internet already has.

Update: I interviewed Monica Gaudio and wrote about it here.

If WBUR seriously messed with your head this morning — airing Morning Edition in the 9 o’clock hour — blame the British!

BBC journalists are on strike for 48 hours, which means many programs are either canceled or covered up with “evergreen” material. My bosses opted to air another hour of Morning Edition as a more useful alternative for listeners.

Both radio and television hosts are walking out with the National Union of Journalists. Management is scrambling to put together a basic news service. Some programs were cancelled, others replaced by recordings. They’ve published the new schedule here.

I’m doped up on cold meds, and I was really, really confused.

Indeed, WBUR is my clock. I know I need to be out the door before I hear ME’s business news. If I hear the BBC, I’m late. (And if I hear On Point, I’m probably sick.)

More from The Guardian.

What’s news on a rainy Friday morning in Boston:

A high school guidance counselor told Roderick Ireland he would only amount to an auto mechanic. Now he is poised to become the first black chief justice of the Supreme Judicial Court. (WBUR)

A flight-school owner in Stow 30 students were arrested for being here illegally. “Those arrested at the school about 30 miles west of Boston are Brazilian and have no known terrorist ties.” (AP)

Tim Cahill settled the lawsuit against his former aides. “Loscocco-gate” was the October surprise of the gubernatorial race. (State House News Service)

Big Papi stays in Boston… for  now. “The Sox yesterday exercised their one-year, $12.5 million option on Ortiz, electing to trade more money for less of a commitment.” (Globe)

The contractors responsible for hitting a gas line that blew up a Hyde Park house will keep working the job. The man who lost his house is pretty miffed with Mayor Menino, who lives three blocks away. (Universal Hub)