With all the hubbub surrounding airport security screening procedures ahead of Thanksgiving travel, illustrator Louisa Bertman, of Cambridge, contributes this cartoon: 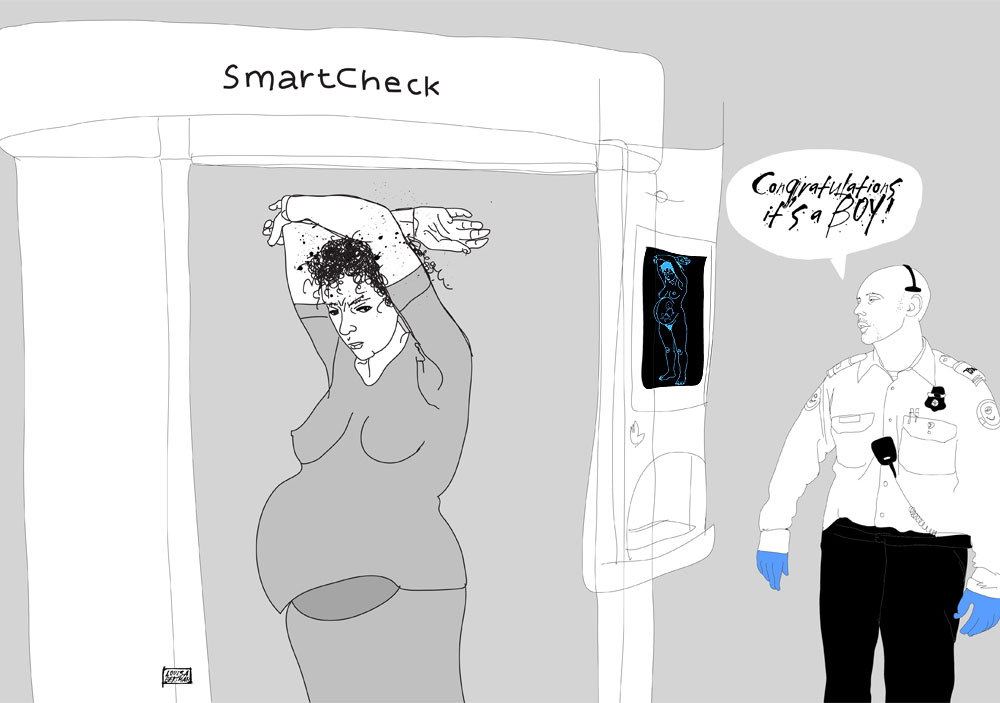 Perhaps you tuned in to WBUR’s newscasts during Morning Edition. It was not uplifting radio.

Across the hours, 11 bodies:

Here’s the Boston Globe in its story on the JP killings (emphasis added):

… the latest multiple killing in a year that has seen an overall increase in bloodshed, with shootings in parks, playgrounds, homes, and now a restaurant. Boston has had 70 homicides this year, compared to 45 at this time last year.

A 33-year-old Mattapan man will be arraigned in Dorchester today. Dwayne Moore has been charged with four counts of murder and one count of assault with intent to murder. In 1996, Moore, then 19, was convicted of manslaughter in the 1995 stabbing death of a Milton teen. (Herald)

The last big hurdle was passed for Cape Wind. “(T)he Patrick-appointed three-member DPU commission said the increase in ‘electricity bills is acceptable, given the significant and unique benefits of the project.’ ” (Globe)

A gang connection is cited in Sunday evening’s slayings in a popular JP pizzeria. Despite the neighborhood, it’s not the first such incident: “… a year ago, a convenience store clerk was shot to death … just down the road, and shootings have occurred in nearby Hyde Square.” (Globe)

The Cambridge man who invented the X-ray technology in full-body airport scanners says they’re the better choice. “The pat-down is unbelievably more obnoxious than the technology in these machines,” said 88-year-old Martin Annis. (WBUR)