Cooks Source, the tiny western Mass. magazine beleaguered by a plagiarism scandal, has made a radical policy shift: The publication will start crediting writers and will only print articles with their consent.

In other words, the magazine will start observing centuries-old best practices and intellectual property law. 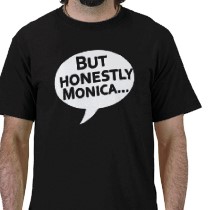 You can buy a "But Honestly Monica" T-shirt. (Zazzle.com)

The Cooks Source website has been deleted and replaced with a long, unsigned statement. The magazine also deleted its Facebook page — the focus of most of the Internet’s rage — after it was “hacked by unknown parties.” (Update: The FB page appears to still be there. Thanks, kejia.)

As I wrote here last week, a woman named Monica Gaudio discovered that the magazine had printed her 2005 essay on medieval apple-pie recipes — without her permission and without paying her.

Gaudio complained on her blog and published the now-infamous response from the magazine’s editor. (Just Google “but honestly monica.”) The post became an Internet meme overnight, and the magazine came under intense attack.

We sincerely wish to apologize to her for this error, it was an oversight of a small, overworked staff. We have made a donation at her request, to her chosen institution, the Columbia School of Journalism. In addition, a donation to the Western New England Food Bank, is being made in her name.

The statement goes on to say the flap has hurt the magazine’s advertisers:

Small business owners are being bombarded with hate mail, and distasteful messages because someone downloaded their contact information on these bogus sites. These small business owners work very hard to keep their businesses going in a bad economy. We respectfully request this harassment be stopped immediately.

Starting this month, the statement says, “we will now list all sources. Also we now request that all the articles and informational pieces will have been made with written consent of the writers.”

At the end of the statement, an olive branch:

“Regardless of what has been said, we liked her article very much.”