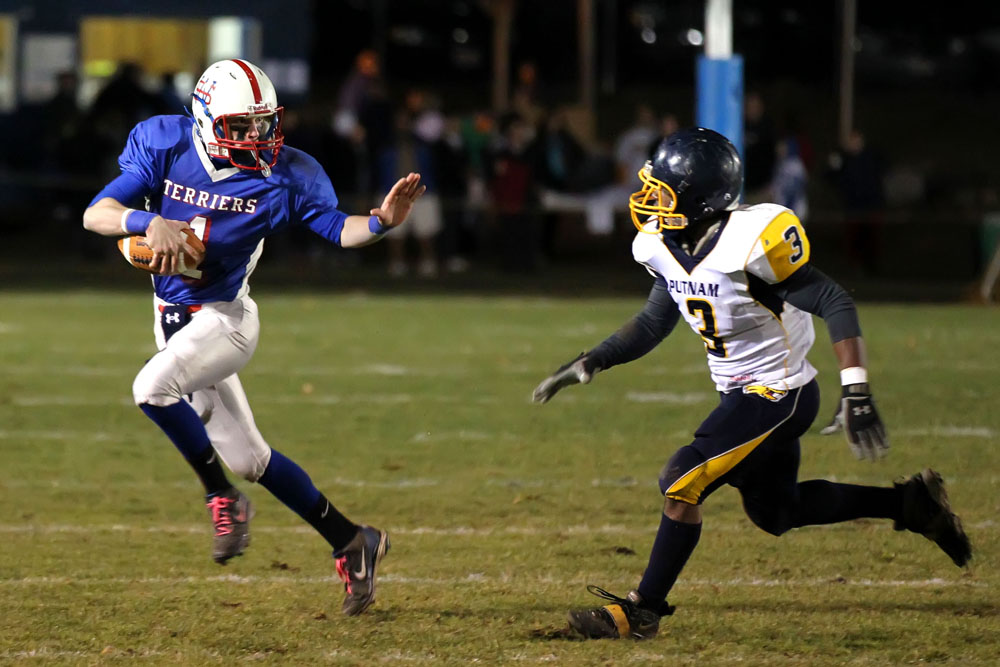 Out in western Massachusetts, West Springfield's Ty Mann runs from Putnam's Ricardo Wright in a game on Nov. 12. (Courtesy of Peter Camyre/Flickr)

As American as pumpkin pie and turkey dinner, football has its hallowed place on Thanksgiving. But, thanks to another American staple — beer — some kids won’t be allowed to play in their annual Thanksgiving Day football game.

Administrators in Maynard have canceled tomorrow’s game between Maynard High School and Clinton High School after four Maynard players were found drunk at a school dance.

After suspending the four players, Maynard doesn’t have enough warm bodies to safely field a team, Superintendent Mark Masterson said in a statement, and the team had to cancel the game.

As a former high school football player, I know that this game means the world to all of the players. Sure, the four kids made a stupid decision, but now two schools miss the opportunity to carry on a long-standing tradition and the meat, if you will, of many families’ Thanksgivings will be cut out. One’s heart aches for the poor seniors, especially those from Clinton, whose final game was canceled.

The seniors who play for Agawam High and West Springfield High are decidedly more chipper this holiday week after learning that their game will go on as scheduled despite the suspension of four players and four coaches at Agawam.

The Agawam-West Side game had been in limbo since Agawam school officials learned that a hazing incident targeting young players had taken place in the locker room.

As the Globe reported, these Thanksgiving games are about more than just the high school players.

The prospect of Thanksgiving without the big game had upset many parents and alumni in Agawam and neighboring West Springfield, and the decision to let the teams play was a relief.

“It’s important not to punish the entire community and those kids who have not participated,’’ said Mayor Richard A. Cohen. “They deserve to play, and the game will go on.’’

Cohen and (Agawam Superintendent Mary) Czajkowski said they had received many calls from people urging them to allow the game to proceed as scheduled.

Hazing and alcohol violations cannot and should not be tolerated, and enforcing consequences for poor decision-making is crucial in giving students a real education. But now, entire towns are having to learn those lessons the hard way.

The rest of us who were blessed to play our final high school football games on glorious, chilly Thanksgiving mornings should appreciate the gifts those memories bring. And give thanks.