As BU Police warn of a rash of bike thefts — and State Police report a grisly hit-and-run today on the Jamaicaway — here are two two-wheeled tales with happy endings. 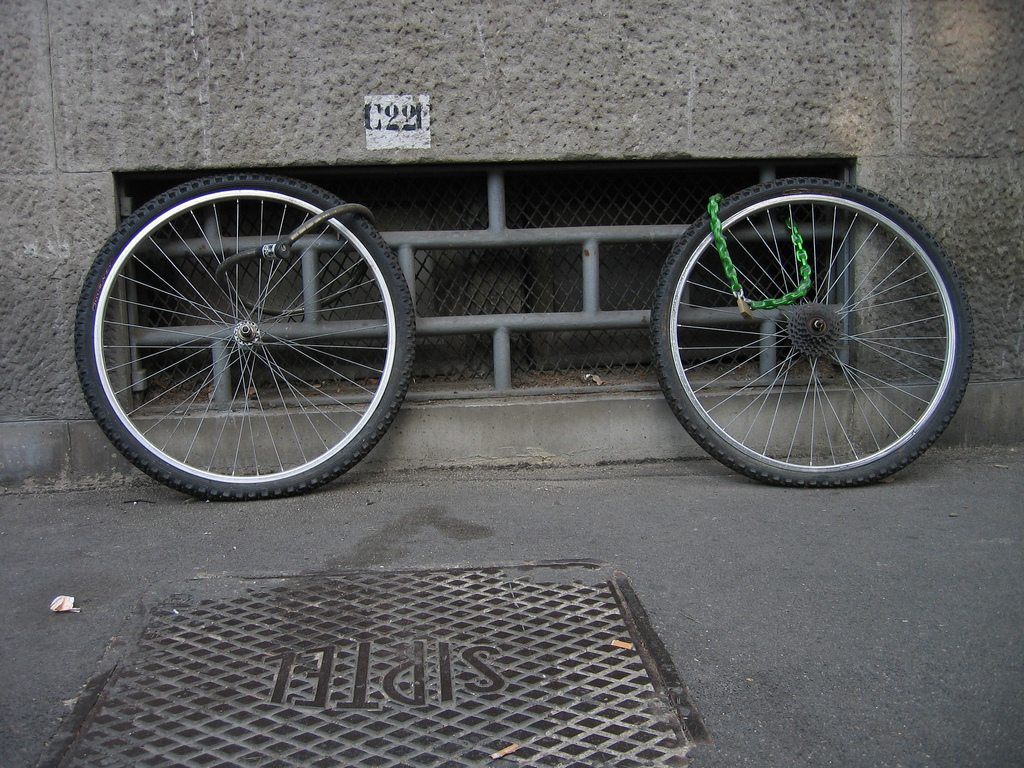 After he dashed into J.P. Licks in Brookline for ice cream last night, WBUR’s Will Smith discovered his $1,500 bicycle — his only transportation — was gone.

“I was pretty bummed. But then again, I felt pretty stupid,” he says. “I left it out unlocked .”

He was inside all of five minutes, he says.

Will flagged down a Brookline cop, who called in the report. “There’s not much we can do,” the officer told him.

Ten minutes later, Will’s wife greeted him at his front door: “They found your bike.”

They found it deposited behind a store in Allston, an officer later said, probably waiting to be picked up by an accomplice as part of some kind of bike-stealing ring.

Will picked up the bike this morning and asked for a copy of the report so he could write a thank-you note. (“The chief likes getting those,” the officer told him.) The report names Det. Lt. Lipson, Det. Lacy and Det. McDonnell.

“I had no expectation of getting my bike back,” Will says. Now he can have his ice cream and eat it, too.

Meanwhile, in Boston yesterday, a man called police after he saw his stolen bicycle for sale on Craigslist. With the cops’ help, the man arranged a meeting with the sellers to buy the bike. The BPD report takes it from here:

Around 10:15AM, two male suspects rode up on two bicycles to 560 Huntington Ave. and one asked the victim, “Are you the one looking for the bike?” The victim responded affirmatively but stated to the two suspects, “Yes, but I wanted the white bike.” One of the suspects responded to the victim that he had already sold the white bike and attempted to negotiate a deal for the bike that he ridden there. At that time, detectives and officers walked up on the suspects and identified their office.

The two teens admitted to stealing the bikes and were arrested. Incidentally, the man had met one of them two years earlier — when the teen returned the man’s stolen bike for a reward.

The Herald reports a 35-year-old man was shot dead at 11:40 last night, at the Cathedral public housing project at 42 Harrison Archway, in the South End.

The victim would be Boston’s 50th reported homicide this year, bringing the total to the same as last year’s — with three months before the year’s end.

Update: The BPD says officers heard the sound of gunshots and responded immediately. The man was pronounced dead shortly after arriving at Boston Medical Center.

Update: The victim is identified as Frederick Mathieson, 35. The Globe reports Mathieson is the 56th homicide in Boston this year, according to police. I am working to figure out the disparity in our numbers.

What’s news on a sunny(!) Friday morning in Boston.

State Treasurer and independent candidate for governor Tim Cahill is suing his former top campaign aides. In a lawsuit filed yesterday, Cahill alleged that his campaign strategists, campaign manager and political consultant conspired to pass critical information about his campaign to Republican candidate Charlie Baker and to the Republican Governors Association. (WBUR)

E-Mails Point To Calculations Before, After Loscocco Defection

There’s No Crying In Baseball, Or Politics

Tim Cahill’s lawsuit crying foul about his Republican consultants allegedly consorting with other Republicans on Charlie Baker’s team is irrelevant to voters in this campaign. It serves as a handy excuse for why his campaign has failed. But, when you lie down with dogs, you get up with fleas. (ElectionWire)

Dee Dee Martin has been in Kathmandu, Nepal, for more than two months, unable to bring her newly adopted daughter back to Massachusetts with her. The U.S. closed adoptions from Nepal because they fear some of the children are being stolen and sold. (WBUR)

For the first time since South Boston crime boss James “Whitey’’ Bulger fled 15 years ago, the US Marshals Service has joined the international manhunt. (Globe)