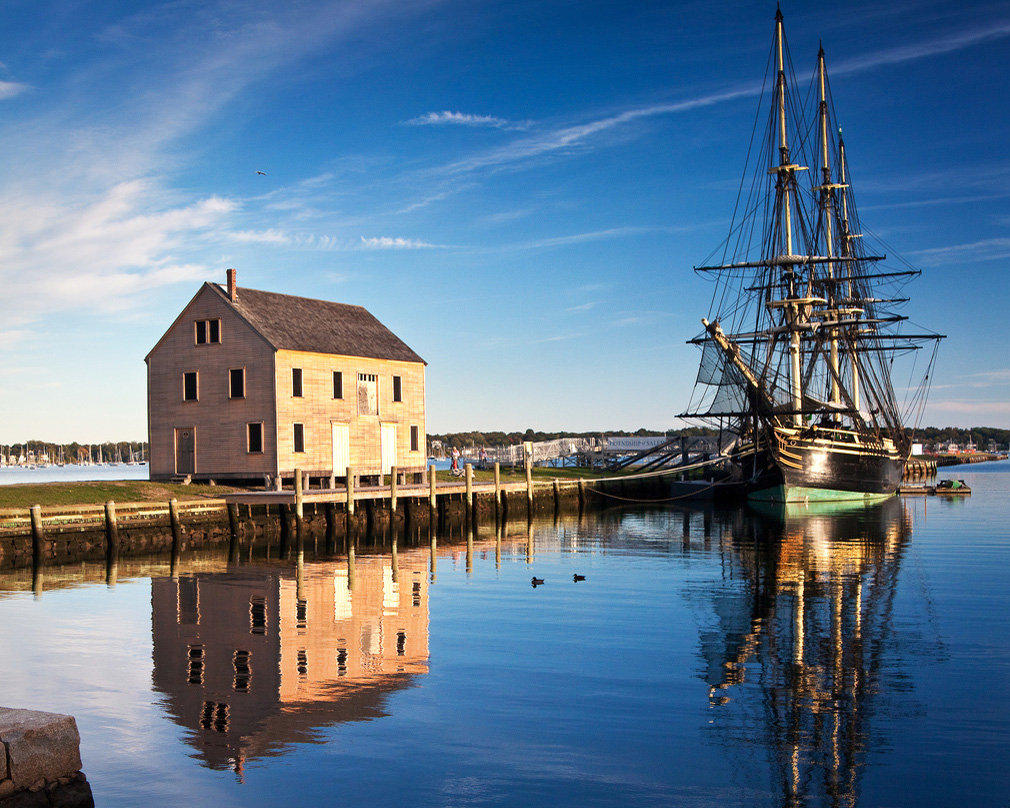 Photographer Jeff Weeks shot this pretty picture of the Friendship yesterday in Salem:

I walk by here a couple of times a day on my daily dog walks, and thought the sky and lighting were especially nice this evening. Plus it reminds me of the scene in Pirates of the Caribbean III where they have to flip the Black Pearl upside down at sunset to escape Davey Jones’ locker. 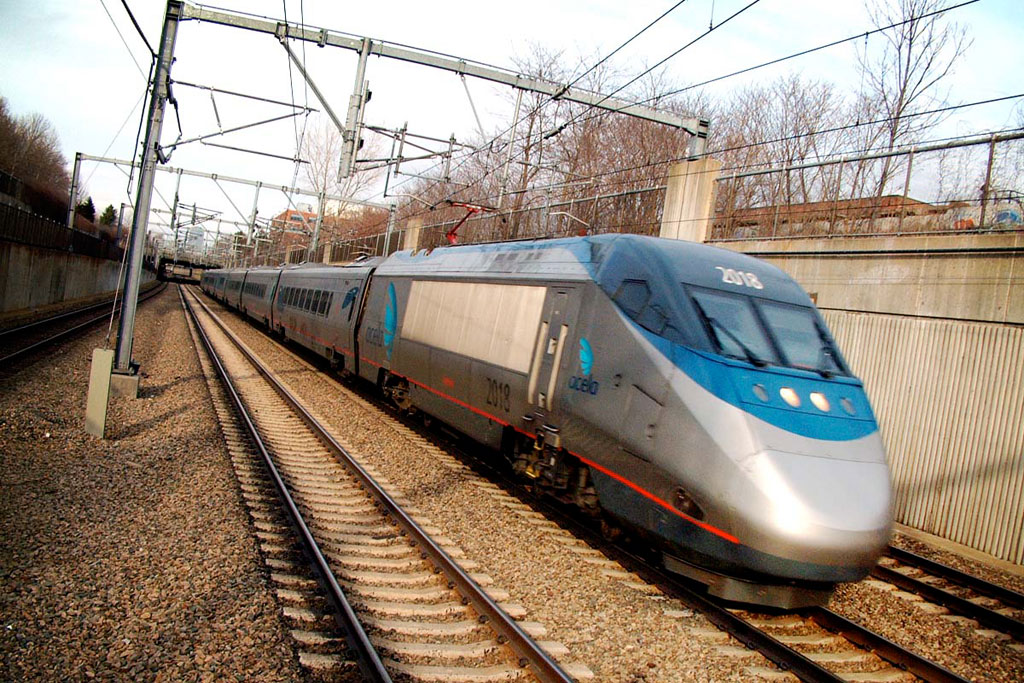 Even though you can get to New York on a $15 bus ticket, more and more people are opting to take the train.

More than 10 million people rode the Washington-New York-Boston rails in the fiscal year ending Sept. 30, a 4.3 percent increase over the year before, according to new data from the company. That amounts to almost $900 million in ticket revenue.

“People are now starting to get back to traveling again after the heart of the recession hit about a year ago,” said Cliff Cole, an Amtrak spokesman. (Last year, ridership dropped for the first time since 2006.)

The company says the growth in the Northeast Corridor drove a nationwide ridership record. “It’s one of our biggest moneymakers,” Cole told me.

Why are more people taking the train when the bus is cheap? Gas prices are still high. Road congestion is still exhausting. Air travel is still unpleasant.

Amtrak tickets from Boston to New York run $50 to $200, depending on time of day and amenities. The fast, business-oriented Acela Express — which saw 7 percent growth last fiscal year — offers free Wi-Fi. (So do some bus services, such as the Greyhound-operated BoltBus, but the connections are spotty in my experience.)

Since fiscal year 2000, Northeast ridership is up 37 percent. Now we have to wait about 30 years for super-high-speed trains that can do Boston-New York in 84 minutes. That would beat the pants off a bus ride, which can take five hours on a Friday night.

After this weekend’s mixed performance in Prague, WBUR Bruinblogger Ric Duarte looks ahead to the 2011 season. Last week, Ric explained the most significant changes to this year’s lineup. –AP 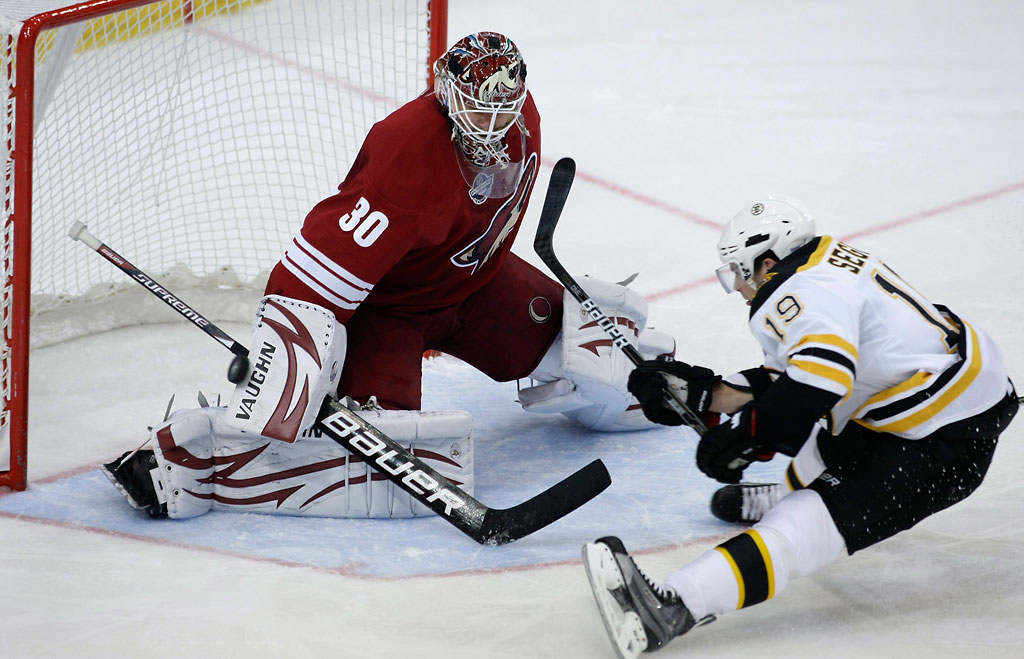 Boston's Tyler Seguin, right, shoots to score past Ilya Bryzgalov of the Phoenix Coyotes during a game in Prague on Sunday. Boston won 3-0. (Petr David Josek/AP)

The Bruins finished their European vacation looking like the team from last year, with no cohesion and a real knack for making the average goaltender, Ilya Bryzgalov in this case, look like the second coming of Georges Vezina.

In the season opener Saturday in Prague, the Bruins gave up three clean breakaways, one of which the Phoenix Coyotes scored on. They had no fight for the puck. They let Phoenix pretty much have their way. Stop me if you’ve heard this before.

On Sunday, from the opening faceoff, you had to ask, Who are these guys? They fore-checked, they back-checked, they took care of the puck in their own end and created quality scoring chances that were non-existent in the game on Saturday.

END_OF_DOCUMENT_TOKEN_TO_BE_REPLACED

What’s news on a chilly Tuesday morning in Boston:

The state’s economy is growing faster than the nation’s as a whole, but the recovery here remains uneven and vulnerable to faltering national conditions, according to an analysis by leading local economists. (Globe)

Challenger Bielat Holds His Own Against Master Debater Frank

Rep. Barney Frank faced his Republican challenger Monday night in their only televised debate. It was the first chance for the challenger, Marine reservist Sean Bielat, to show he could survive going on television against the congressman famous for his gift with words. (WBUR)

A woman allegedly drinking and driving picked the wrong car to rear-end. Inside the unmarked cruiser, the head of the Massachusetts State Police. Not only was Donna Sclamo allegedly driving drunk, but her license was suspended. (The Shrewsbury Lantern)

The red-beret Guardian Angels are making a comeback in Boston, three years after their last foray sputtered amid an embarrassing scandal.Members of Guardian Angels chapters based in Brockton and Florida have been conducting patrols for the last month in Downtown Crossing, the Theater District and Chinatown. (Herald)

Today, 80 Border St. has studio spaces for 40 artists and sits in the heart of East Boston’s blooming arts community , which is finally gaining a reputation and prestige it has long craved. (Globe)