The Globe reports on itself: 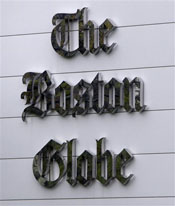 A group of more than a dozen investors and management experts will make an offer to buy The Boston Globe from The New York Times Co., a leader of the group said.

The newly-formed group, which calls itself The 2100 Trust, wants to purchase from the Times Co. the New England Media Group unit, which includes the Globe, Boston.com, and the Worcester Telegram & Gazette.

“The Boston Globe has been a pillar in the city, the Commonwealth and the region for more than a century. We believe that The Boston Globe’s strongest days can be ahead,” according to a statement from the group.

The Boston Herald identifies the head of the group as Aaron Kushner, 37, of Wellesley.

Back in April 2009, WBUR first broke the story that The New York Times Co. threatened to shut down the Globe. The Times Co. backed off after a long and tense standoff that resulted in deep pay cuts and layoffs.

High-profile suitors lined up to buy the Globe. In October 2009, the Times Co. announced the Globe was no longer for sale.

The Times Co. paid $1 billion for the Globe in 1993. Based on previous reporting, the Globe was estimated to be worth between $20 million and $200 million, but those numbers are almost certainly outdated.

Update: The NYT has the group’s full statement.