Normally it’s WBUR asking people for money. But as our fall pledge drive got underway this week, another news organization reminded us that news has to be paid for one way or another. 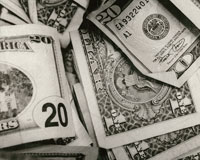 The money has to come from somewhere. (Daniel Borman/Flickr)

The Boston Globe’s paywall announcement prompted some interesting reactions from our own listeners. My friend Christian Holland (@crholland) tweeted:

We have received a lot of comments like this, actually, and it’s nice to hear. But I responded to Christian thus:

@crholland It’s a common misconception that @WBUR content is free.

Because 90.9 FM and wbur.org are free to use, people seem to forget that high-quality news and information are not free to produce. Only an estimated 10 percent of people who use WBUR give us money.

And yet our business model is arguably the most successful in the industry right now. That’s why Craigslist founder Craig Newmark this week said NPR will be the dominant news force in 10 years. Trust is “the new black,” he said. People support us because they trust us.

The Globe is also a trustworthy news source that should be supported. The Globe still has more reporters in more places than any news organization in New England. The Globe still sets the agenda for the city every single day.

Public radio was a working business model that has so far withstood the Internet revolution; the Globe is trying to find one.

When the Telegram & Gazette erected a partial paywall in August, the users — predictably — revolted. I can go to a thousand other sites that are free, people say. In my estimation, those “thousand other sites” will either a) dry up or b) carry news and information that people can’t trust. You can’t have your cake and eat it, too.

I really hope the architects of the new BostonGlobe.com nail this. Clear out the pop-up ads, the clunky navigation, the linkbait, the widgets and the clutter. Deliver a pretty, fast, easy-to-use and engaging experience. Give consumers no excuse but to support good journalism.

We can pay now or pay later. Pay money for news you can trust now — or pay the consequences when you can no longer trust the news.