This time, it’s former Govs. Sarah Palin and Mike Huckabee and former House Speaker Newt Gingrich — paid Fox News contributors — who are jumping to the defense of Juan Williams after his unceremonious firing.

Thing is, NPR receives no direct funding from the federal government for operations. More on that in a moment.

In an open letter to President Obama, Palin writes:

NPR is unable to tolerate an honest debate about an issue as important as Islamic terrorism, then it’s time for “National Public Radio” to become “National Private Radio.” It’s time for Congress to defund this organization.

And Huckabee, in a statement provided to CNN, says:

“It is time for the taxpayers to start making cuts to federal spending, and I encourage the new Congress to start with NPR,” he said.

And now the AP reports:

In response to the firing, South Carolina Republican U.S. Sen. Jim DeMint planned to introduce legislation to end federal funding for NPR, his spokesman Wesley Denton said Thursday night. Denton said the senator would expand upon his proposal in a statement on Friday.

I said it before, but I’ll say it again: NPR receives no direct funding from the federal government for operations. Here is a breakdown of NPR’s funding sources, as provided by NPR.org: 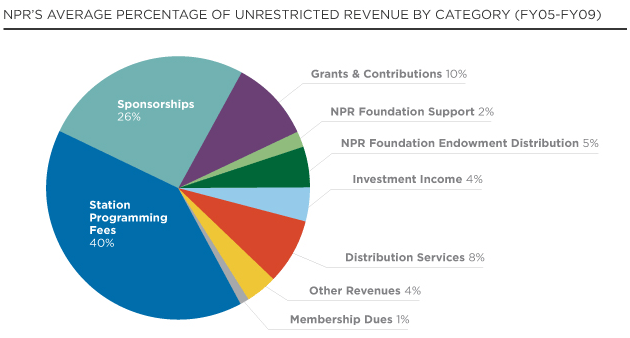 The largest share of NPR funding comes from its member stations (including WBUR).

The local stations receive some funding from the Corporation for Public Broadcasting, a taxpayer-funded, nonprofit, private corporation, created by Congress in 1967. (Think of it like the Red Cross.)

NPR does receive grants from CPB for special projects, but that funding is not included as part of the network’s operations budget.

So while federal dollars do flow to NPR, the connection is indirect. It may be a fine point, but it’s an important distinction. The federal government can’t “defund” NPR. What Congress can do is cut CPB funding — which has diminished over the years and has, at times, been threatened.

But those CPB funds play a minor role for a large-market station like WBUR (around 6 percent) and represents a much higher percentage for a station in a smaller market, such as Wyoming and Idaho.

Calls to cut taxpayer funding of CPB would mostly hurt small stations — stations that played no part in the decision to fire Juan Williams.